Few things rock our world like a big, giant...rock. And 2012 was quite the year for serious engagement bling! From Blake Lively's solitaire sparkler to Angelina Jolie's art-deco diamond, take a look back at the most memorable rings of the year.

popped the question last August, but it wasn't until two months later that we caught a glimpse of Aniston's massive oval engagement ring. "Having experienced everything you don't want in a partner over time, it starts to narrow down to what you actually do want," she told InStyle of her actor-director-screenwriter partner. Judging by the size of the sparkler (it's estimated to be between 12 and 18 carats), we're guessing it was worth the wait!

While celebrating her birthday in Mexico earlier this summer, Modern Family's sauciest housewife said yes to businessman boyfriend Nick Loeb, who proposed with a 7-carat square cushion-cut diamond ring flanked by a diamond on either side. We think Gloria would approve!

Agent and talent manager Jason Trawick popped the question on his 40th birthday with a 4-carat round white diamond ring featuring 90 small round diamonds along the band, a design by celebrity jeweler Neil Lane. "Jason is a romantic and when I asked him to tell me about Britney and what the ring would represent to them so I could find inspiration, his response was always the same-she is his princess!" Lane told People. Hence the tiara-style setting and crown-like band!

Some girls have all the luck! The Gossip Girl star was spotted leaving the Boone Hall Plantation in South Carolina in September, where her nuptials to actor Ryan Reynolds took place, wearing a gorgeous (and giant!) 10-12 carat solitaire sparkler. The Lorraine Schwartz ring features a light pink oval diamond set in a rose gold band with pavé diamonds.

Chad Kroeger put a ring on it...a very big ring on it! The Nickelback frontman proposed to pop rocker Avril Lavigne last August with a 14-carat, pear-shaped rock flanked by two half-moon-shaped diamonds. The singers met while Kroeger was working with Lavigne on her still-unnamed fifth album.

Brad Pitt proposed to longtime partner Angelina Jolie in April with a rectangular diamond ring estimated to be more than 10 carats and worth over $1 million, People reports. "He wanted every aspect of it to be perfect, so amp#91;Iamp#93; was able to locate a diamond of the finest quality and cut it to an exact custom size and shape to suite Angelina's hand," said Beverly Hills jeweler Robert Procop, who designed the ring exclusively with Pitt.

popped the question with an emerald-cut ring set on a thin diamond-studded band, designed in part by Kwiat jewelers. The Les Miserables star and her love of four years made it official during a ceremony in Big Sur, California in September.

popped the question with an emerald and diamond ring, which Berry was first spotted wearing in January. The bling was designed by Robert Mazlo of Paris, whom Martinez called "a real artist" who has been making jewelry for "kings and queens for many centuries."

Art consultant Will Kopelman proposed to the 36-year-old actress late last year with a radiant-cut ring, which features smaller diamonds set in the band, designed by Graff Diamonds.

proposed to Jessica Biel while vacationing in Montana with an 18-carat white gold and black rhodium plated ring. "I had no say whatsoever. I don't micromanage," Biel told InStyle. "He is fearless in his choices and has a real eye for design. And I'll be honest: He has better taste than I do." The setting also featured two aquamarines on either side, Biel's birthstone.

It's a (wedding) party in the USA! Australian actor Liam Hemsworth, who met 20-year-old Miley Cyrus when they costarred in The Last Song in 2009, popped the question last May with a 3.5-carat diamond ring from jeweler Neil Lane.

When it came to designing an engagement ring for longtime girlfriend Jacqui Ainsley, filmmaker Guy Ritchie was extremely hands on. "He was very involved in the whole process, very interested in each detail of the ring, he's a director!" Lane told People. The result? A five-carat, platinum-set ring with over a hundred tiny diamonds surrounding the center stone. 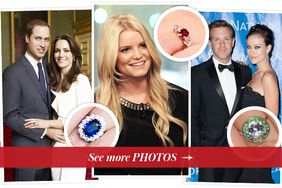 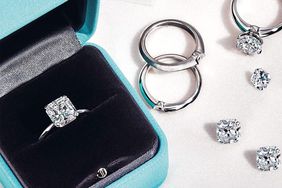 The Reason Most Engagement Rings Look the Way They Do 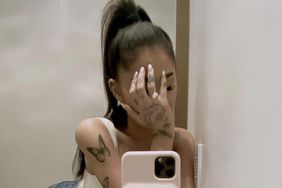 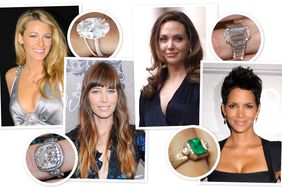 Poll: Which Celebrity Engagement Ring Style Is Your Favorite? 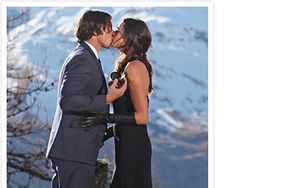 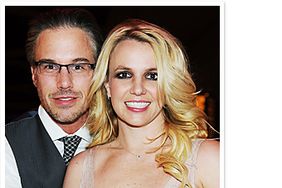