Kim Kardashian shared a never-before-seen photo of what looks like the couple holding her daughter.

Before she was even a year old, she was featured on the cover of Vogue (a moment that her mom Kim Kardashian included in the highlights), and right after she was born in June 2013, a slew of her parents' famous friends came to visit her. And of those celebrity visitors appeared to be none other than Beyoncé and Jay-Z. The proof is seemingly in Kim's latest video interview with Vogue, titled "Objects of Affection."

During the video, Kim gave a tour of her most cherished objects inside her home, which included her four children's personalized scrapbooks. As she thumbed through North's book, she landed on a page of never-before-seen photos of her daughter being held by celebrities, such as Nicole Richie, La La Anthony, and a couple that looks a lot like Bey and Jay. Fans thought so too, and shared their detective work on Twitter.

"Anyone who knows me, they know that I love to scrapbook, so that my kids can have the most amazing memories," Kim said of the baby books stacked in her sitting room. "I have all of their little hospital details. I've written out mom and dad's history." When it came to North's in particular, Kim highlighted "her first Vogue shoot, everyone that visited her, the sonograms, what I ate the whole pregnancy." She continued, "I really wanted to archive these memories. And it's just really, really cute."

Elsewhere during the tour, Kim showed off North's artwork. "She's a really, really good artist, and she loves to paint," she said of her 8-year-old daughter while holding up a handful of her pieces. "I love seeing the personality and the moods and everything that she goes through and is feeling. It's really been an amazing hobby of hers." 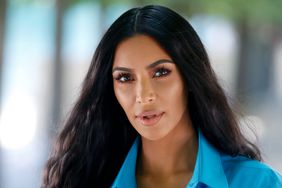 Kim Kardashian Spent More Than $100,000 to Paint Her Cars to Match Her House