Given that Beyoncé received a whopping nine Grammy nominations for her 2016 album Lemonade, it's only fitting that she celebrate with a lemonade-themed Christmas tree! The pop star shared a video clip filled with cute holiday pictures on Instagram, and it includes snaps of her epic decor.

The 35-year-old "All Night" singer set her photo montage to the festive song "Sleigh Ride," and she made sure the pictures changed in time with the song. The clip starts out with pictures of Beyoncé in front of a huge tree covered in silver and purple ornaments. She's wearing a skin-tight navy blue dress with an extremely low-cut V-neck, and her highlighted hair is styled in tight curls.

Beyoncé Just Put All Other Office Holiday Parties to Shame

The next images in the series are of girly white-and-pink decorations—maybe in Blue Ivy's room? They include a sweet nutcracker, a pink ballerina, and a delectable cupcake ornament. After a few more pictures of Beyoncé rocking silver reindeer antlers, the pop star shows off her amazing lemonade tree. It's just a small evergreen, but it's covered from top to bottom in all sorts of lemon-themed ornaments!

Beyoncé and her family are celebrating the holidays in the most Beyoncé way ever—can you say holiday #goals?

VIDEO: Behind the Scenes with Beyoncé 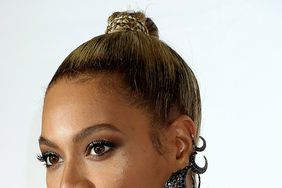 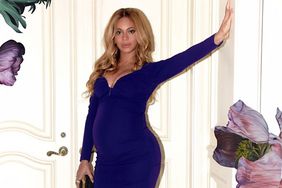