Proceeds from the song will benefit black-owned businesses.

Leave it to Beyoncé to commemorate this year's Juneteenth with a surprise song in honor of the holiday. On Friday (June 19), the celebration of the end of slavery in United States, the pop star dropped new music, titled "Black Parade," along with an initiative supporting black-owned businesses by the same name.

On Instagram, Bey announced the single's release and captioned her post: "Happy Juneteenth Weekend! I hope we continue to share joy and celebrate each other, even in the midst of struggle. Please continue to remember our beauty, strength and power."

She added that proceeds from the song will benefit black-owned small businesses — ranging from fashion to home and living — which are included in an online directory on her website. "Being Black is your activism. Black excellence is a form of protest. Black joy is your right,” she wrote under the Black Parade Route section of her page.

Lyrics from "Black Parade" pay tribute to the songstress's home state of Texas, where the last enslaved black people were freed by Union soldiers in Galveston. "I'm going back to the South, where my roots ain't watered down / Growin', growin' like a Baobab tree / Of life on fertile ground, ancestors put me on game," she sings at the beginning of the track.

The song also references the Black Lives Matter protests against police brutality and racism, which Beyoncé has been vocal about her support for in recent weeks. In addition to condemning the "senseless killing" of George Floyd, she has demanded justice for Breonna Taylor in a powerful letter addressed to Kentucky's Attorney General, Daniel Cameron. 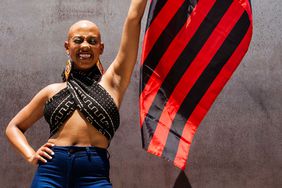 The Fashion Significance of Juneteenth