Spoiler alert! In Breaking Dawn Part 2, Bella Cullen finally makes the switch from the mortal world, and along with adjusting to life as a vampire, Kristen Stewart also had to undergo changes in the hair and makeup department. We caught up with the movie's makeup artist Stacy Panepinto and hairstylist Bonnie Clevering to get the head-to-toe breakdown on the star's otherworldly look. Keep reading to see their tips, and shop the exact products they used!

From Human to Vampire

We first saw Bella as a low-key high schooler in Twilight, and although there was something effortless about her minimal makeup and tousled waves, she wasn't caught up on her appearance. "Before she was a vampire, she was always running around and her hair wasn't necessarily a priority," Clevering said. Her new look, which features alabaster skin, red eyes, and longer hair, is more in line with the glamorous hair and makeup sported by the rest of the Cullen family. "Now as a vampire in Breaking Dawn 2, the other vampire girls got her fixed and beautiful-makeup, hair, and wardrobe is more together. It's like putting a finer icing on the cake."

As Rosalie Hale and Alice Cullen demonstrated in past films, perfect makeup is a must among the immortals. Bella made the switch from her natural look, to a more dramatic eye and paler-than-pale skin. "Once we figured out the shade 'vampire Bella' would be, we looked at different colors on her eyes and lips," said Panepinto. "We wanted her vampire form to have a sexy edge, so we took some liberties and left the minimal makeup behind when she was transformed."

Get the Look: Bella's Flawless Face

It's no secret that vampires in the Twilight series are known for their shimmering complexions. "The makeup used in this film is different from the other films because we were looking to create a vampire that would surpass all others in its beauty," said Panepinto, who layered Kanebo's Sensai Brightening Base ($84; sensai-cosmetics.com for locations) underneath Chanel's Vitalumiere Foundation in Daphne ($55; chanel.com) to create Stewart's alabaster skin. She set the foundation with a light dusting of T. LeClerc Loose Powder in Parme ($50; barneys.com). "The violet color makes her skin appear brighter," she added.

Get the Look: Bella's Piercing Eyes

To complement Bella's new red eyes, Panepinto blended the four shadows from Chanel's Quadra Eye Shadow in Variations ($58; nordstrom.com). "All of the vampires wore red contacts, but I worked with the eye shadows to enhance Kristen's eyes. She has a more dramatic eye through the whole movie," Panepinto told InStyle.com. "We chose to play down Bella's lips and focus on her eyes because they are such a huge part to the vampire look." An ample amount of mascara and false lashes completed the winged-out eye.

Bella is described in the Breaking Dawn book as having much darker, waist-long hair, but Clevering decided against dyeing Stewart's hair to get the look. "A few extensions were used here and there, but definitely no wigs or dye. I gave her hair more curl and texture," she told InStyle.com. "I polished her up as a vampire. As you can see, her whole look changed to be more perfect."

Get the Look: Bella's Wavy Strands

Forget the excess mousse or hairspray-in the vampire world, there is no room for stiff hairstyles, so Bella's curls were kept soft and touchable. "I didn't use a lot of styling products because they would weigh Kristen's hair down," said Clevering. "I did use ENJOY's Shine Spray ($16; sleekhair.com), and Kristen loved the brand's shampoo and conditioner ($16 each; sleekhair.com). I would blow her hair out to create body, and then use a large-barrel curling iron for loose ringlets."

Get the Look: Bella's Wavy Strands

Between the heavy lights and wardrobe changes, a full day on the set can take its toll on a hairstyle. To ensure her waves didn't fall flat, Clevering would add a touch of ENJOY's Texture Spray ($15; sleekhair.com) to pump up the volume. "It creates great body, and I would spray Kristen's hair with the product before hitting her hair with a curling iron," she said. 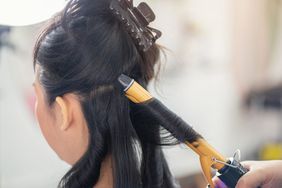 How to Make Pin-Straight Hair Hold a Curl, Once and For All 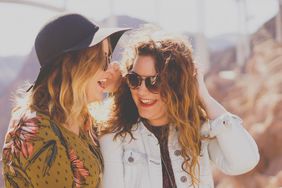