Givenchy creative director, Riccardo Tisci, is a designer who never seems to be alone. He frequently chronicles his city-hopping whereabouts with fashion and pop culture notables like Naomi Campbell, The Weeknd, Madonna, and many a Kardashian. And so for his latest project for the Parisian brand, Tisci created a girl squad dressed to appear in the fall 2016 campaign.

Starring the likes of Bella Hadid, Lily Aldridge, and Irina Shayk, the portfolio of images, photographed by Mert Alas and Marcus Piggott, finds the beauties marching out of a building and onto the streets of New York City, each carrying a geometric red or black handbag. The ladies don military-like black and red jackets with gold and fur trims and matching slacks and wear their hair in slicked back 'dos.

Tisci has celebrated many killer red carpet and high-profile moments this year. He was Julia Roberts’s clothier of choice at the 2016 Cannes Film Festival in May and in April First Lady Michelle Obama turned to a daring champagne-colored Givenchy haute couture gown with a sheer, fully embellished overlay at the White House Correspondents’ Dinner. Beyoncé rocked a floor-length, nude-toned latex dress at the Met Gala, and Cate Blanchett was by far among the best dressed in a blush-toned fringe number at the 2016 Golden Globes. 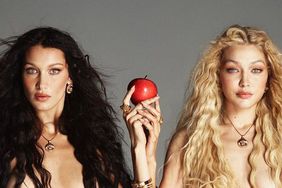