Are the ‘00s the new It decade? Yes, Abercrombie & Fitch’s rebranding is on the tip of every fashion insider’s tongue, but there’s another major label that’s looking to bring its name back into the mainstream conversation of style: Juicy Couture. Once known for its infamous velour tracksuits, it has now tapped Victoria’s Secret Angel (and wife to Adam Levine) Behati Prinsloo to not just star in its spring 2016 campaign, but also piece together an entirely new capsule collection.

The model took to Instagram to share a preview of what to expect from the Juicy Couture Black Label selection. From the looks of her two promotional shots, it appears that the collection consists of modern twists on the classic jumpsuit (shorts are now de rigueur) along with denim shorts, full-length jackets, T-shirts, and accessories that fall right into the athleisure category.

Mark your calendars—Behati’s collection will be available on April 15. 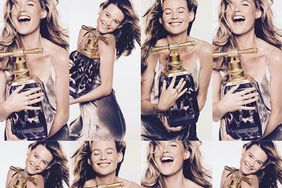