The actress, who plays Monica Lewinsky in the hit FX show, tells InStyle all about taking on this historic role, keeping her career versatile, and joyful fall fashion.

Beanie Feldstein has compiled quite the resume over the past few years. Between Broadway, Booksmart, major fashion campaigns, and more, her rise to super-stardom seems inevitable.

Now, of course, it's the actress' latest accomplishment that has garnered worldwide attention: playing Monica Lewinsky in Impeachment: American Crime Story, which airs every Thursday at 10 pm on FX. Since Feldstein's fans and followers are used to seeing her in comedies, this role has allowed her to step into a new light — and truly embrace her range. Speaking to InStyle at Kate Spade's New York Fashion Week presentation, Feldstein admits the job has been a "huge undertaking," but it's also something she's "incredibly proud of."

"When Ryan [Murphy] called me, it was such a huge moment in my life because he believed in me as a dramatic actor, and I was also telling a story of a real human being," she says. "It's completely different than an imagined circumstance with an imagined human being — it's a real person's life. What [Monica] had to go through was incredibly traumatic and emotional, so I had to go through it right along with her."

The role is further proof that Feldstein is carving out an extremely versatile career, able to bounce between genres (next up is the lead in the musical Merrily We Roll Along). When asked if that's something she aims for when looking for new projects, she has the perfect response.

Feldstein also tells us that working with such accomplished co-stars for Impeachment — from Sarah Paulson, who plays Linda Tripp, to Clive Owen, who plays Bill Clinton — was comparable to a "10-month masterclass" in acting for film and television, especially since her background is in theater. But there's one cast member she says she was particularly excited to work with.

"Sarah Paulson and I can't keep our cool around Edie [Falco]," she says, talking about the iconic Sopranos and Nurse Jackie actress who takes on the role of Hillary Clinton. "We literally stopped being able to make words and whole sentences. We're just like, 'Edie!' We just lose our actual minds. She's just the best."

Feldstein also can't help but sing the praises of those who work behind-the-scenes, including the show's costume designer, Meredith Markworth-Pollack, and the hair and makeup team, who managed to replicate Lewinsky's looks right down to the smallest of details.

"So many of Monica's looks are so known — her hair, her lipstick color, all of it was so iconic. So, we wanted to be as close to that, always," says Feldstein. "We would spend 15, 20 minutes just on the shape of the hair to make sure it exactly matched the photo we had found. In the world of Ryan Murphy, all of the shows are so visually epic and specific, with the most talented artists, hair and makeup, set designers, and costumes. It takes a lot of detail work and specificity and collaboration. It's just a joy to be playing in that sandbox with those people."

In real life, the actress' style preference definitely suits Kate Spade, and Feldstein tells InStyle she enjoys how the brand plays with color and prints.

You've Been Thinking About Investment Pieces All Wrong

"It's so joyful and whimsical," she says of the brand, which has made New York the focus of its fall campaign. "I've been smiling as I see all of the ads with the dancing as I walk the streets in New York. My partner was like, 'It's just so joyous!' It's like a breath of fresh air."

As for the season ahead, Feldstein says she's most excited to bundle up again.

"I've been in LA for almost two years, so just the idea of putting on a coat. I was reunited with my coats the other day and I was like, 'Get ready, girls! We're going out!'"

It's that piece in particular, says Feldstein, that will be highlight of her future fall and winter outfits — even if it's just for a walk around the neighborhood.

"You've got to have a colorful coat, which, with Kate Spade, there's always print and color — it's like a little pom-pom of joy," she says. "I have this really great pink coat that I'd wear with some boots and jeans. I just miss layering it up. It's so much fun. I also love accessories, so a great bag and you're out the door." 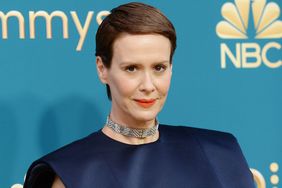 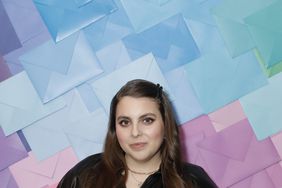