The Nora From Queens star says no one knows what to say to a kid who has lived through that kind of tragedy — and it changed the way she sees the world.

So many things remind me of my mom, Tia. When I go to Korean restaurants and see the banchan, I think of the beautifully prepared bento boxes that she used to make for lunch. When I smell the incense they burn at church, I remember how she converted to Catholicism when she got sick. And when I see really big, '90s-style glasses, I think of the wire frames that she wore whenever she was watching TV or reading at home.

After she passed away [from pulmonary hypertension] when I was 4, her glasses became irreplaceable to me. I would always get them out of her drawer and play with them, so my dad eventually let me keep them. They're one of the few items of hers that I have left, and over the years, they've even helped reveal little details about her that I never got to know.

One thing I can certainly glean from them is that she had horrible vision. The lenses are so thick. Sometimes my dad would play jokes on her and hide the glasses, and even though I was young, I knew that she couldn't see much without them. The frames have this slightly awkward, oversize, art-hipster vibe, which was perfect for her because, as an artist, she was definitely eccentric with her fashion. She loved to go thrifting and wear big patterned skirts and loose-fitting blouses. Sometimes she would wear her glasses when she was painting, and her artwork became another way that I would try to connect with her as I was growing up. Some of her paintings played with light; some were of naked women; and other times she would just paint scenes from her dreams and nightmares. I always wish I knew what she had been thinking about.

Her passing has shaped who I am in every way. Nobody knew what to say to a young kid who has experienced that kind of a loss, so all I wanted to do was make people laugh and let them know that I could still spread joy even though this horrible thing had happened. In some odd way, it put me on this career track of comedy.

Awkwafina Is Ready to Take Control of Her Narrative

Even though my mom was an artist, she was pretty traditional, so I think that she would have been reluctant to let me do some of the things that I've done. But ultimately, I believe she would have been proud that I've succeeded on my own without asking anyone to front me cash while I do it [laughs]. In her absence, I was raised by my grandma, who is essentially just a parent that spoils you. She didn't put the limits on me that I think my mom would have, especially in terms of how far I could take my dirty jokes. My grandma always saw that as cheeky behavior, so I was probably able to explore it more freely as I got older.

When I shot the [viral 2012 hit] "My Vag" video, I decided to wear a pair of big, goggle-style glasses. Mostly it was so that my boss at the publishing house where I worked wouldn't recognize me, but really, all of the glasses I've ever worn are a nod to my mom. I also knew that making a video about my nether regions probably wouldn't be the best way to climb the corporate ladder, so I tried to do the Clark Kent kind of disguise. Turns out, I was just not fit for publishing, but I did love wearing big frames like my mom did. They just work with the shape of my face, which could've been the reason she liked them too.

Ironically, I actually need to wear glasses to see these days, so it's all downhill from here in terms of my vision. [laughs] I've thought about putting my own lenses in my mom's frames, but if my vision deteriorates the same way that hers did, one day soon our prescriptions will probably match up any- way. Plus, there's something special about keeping them just as they are. It's almost like as long as I have her glasses, I can still try to see the world exactly the way she saw it.

Awkwafina stars in Awkwafina is Nora From Queens on Comedy Central and the Marvel film Shang-Chi and the Legend of the Ten Rings, in theaters now. 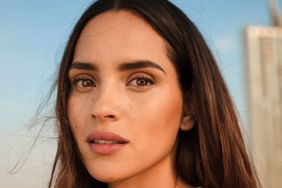 Adria Arjona's Hack for De-Puffing Skin Is In Your Freezer