In my new film, A Wrinkle in Time, we explore the idea that darkness moves faster than light. When I first started working on the story, I had to interrogate that line to really understand it for myself. The idea is that negativity has great power. Whether it leads to physical violence or it manifests as a mean thought, negativity ricochets and does damage in every form it takes.

I grew up in a neighborhood where there was a lot of negativity, but my mother and father? Such positive people. They’d see the good in a situation before they’d see the bad. Always full of light. And so I was that way too for a long time.

But as I grew up and got out into the world, studied history, and became socially conscious, I saw so much wrong. I was ambitious, though. After college I opened my own PR firm, doing publicity for films. I had major clients all over town, and I loved the work. But I got so wrapped up in the hustle and the competition that came from striving every day to get to the next step, to get more. The industry is a very competitive place, and it can bring out the worst in people. I definitely lost the light a little bit.

Oprah 2020? Oprah Winfrey On Running For President And The Way Forward For Women

When I became a filmmaker full-time, that creative endeavor brought me back to myself—and to the positive place that my parents taught me resides within. Exploring human nature and being on sets and trying to make art with people returned me to a head space where I valued the inward journey more than the outward journey.

These days I’m a lot less competitive, a lot less concerned about what other people do. I’m much more focused on the things that make me happy. I believe that good comes when you put out good, and so I just try to emanate joyful vibes. Why not? I’m not going to spend my day hating on someone else. I’ve got so many better and more joy-filled things to do.

Especially on social media, it’s so easy to get mired in negativity. Look, I’m not against throwing shade on the president. I’d call him out in a second. But at the same time I’m not letting it weigh me down and stop me from moving forward with my day. I see some friends online who just let it run their entire day, talking about the way the world is now and their devastation about some of the things that are happening politically. To go so deep toward negativity that it disables you from fighting is allowing the darkness to win.

The pivot towards positivity is a choice I make every day, and it’s really changed the quality of my life. I’ve learned to be better at it by watching those people who light up everyone around them. My mother is one of those people and always has been for me. Oprah is one of those people—it’s hard not to be affected by her glow. I try to be that kind of person too because I so appreciate it when others give that positive energy to me.

So in the end I came to the realization that the line in A Wrinkle in Time is right. Darkness does travel faster than light. But I know for sure that light is stronger than darkness. It might sound a little Pollyannaish, but it’s actually a really radical idea. The world tries to tell us that positivity has less power than aggression and antagonism—that’s not true. Light is the truth. And the truth will set us free.

A Wrinkle in Time opens March 9. 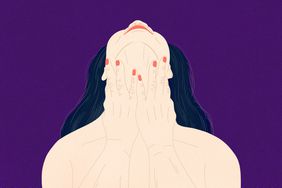