Ashley Graham unexpectedly sparked controversy after posting a naked selfie on Instagram. On Sunday, the model shared a photo of herself fresh out of the shower, captioning the snapshot: "nakie big girl."

While many fans praised Graham for unapologetically showing off her curves, some took issue with her referring to her body as "big." One user recommended a new caption, writing, "nakie *normal* girl," while another commented: "I hate that this is seen as 'big girl.' I see nothing but a beautiful, naturally curvy woman in all her glory... super sexy and womanly."

Graham replied back, explaining her personal definition of the word big. "I hear what you're saying. But if you look at 'big' as a positive and love then you can see it like I do," she explained, adding, "I love my big strong beautiful body."

Always one to keep it real, Ashley previously documented her changing body on social media while she was pregnant with her son, Isaac, and after he was born, she was candid about her postpartum journey. Most recently, she showed off her "mom bod" — which included a few new stretch marks — in a bikini for her campaign shoot with Swimsuits For All.

"I've got more weight on me. I've [got] stretch marks, and in the beginning, I really had to have a lot of conversations with myself and tell myself, 'Okay, new body, new mindset,'" she told People. "But after this photoshoot, I felt so empowered because I was like, 'Yes. I look good. I feel good. This is my new mom bod'." She also added that none of the photos were retouched. "There's always a question of what do you want us to retouch, and what do you want us to take out? And I said, 'Nothing' except a clamp holding up the DIY backdrop," Graham explained. "I want everybody to know genuinely... I want people to see who I am because everybody has a story." 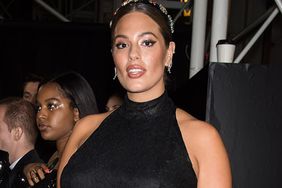