Life as a newlywed has never looked better.

Ariana Grande just offered fans a rare glimpse at her life as a newlywed with husband Dalton Gomez, and after three months of marriage, they still are seemingly in a state of pure domestic bliss.

On Saturday, the singer shared a carousel of images of the couple from their first few months as husband and wife on Instagram. "Some old some new but…I love these," Ariana wrote alongside the sweet snapshots, which included photos of the two inside their happy home.

In the first photo, Ariana is chopping onions while wearing jeans and a crop top, and in another shot from what appears to be on the same day, the singer exchanged a hug with Gomez in the kitchen with a salt shaker in hand. There are also several photos of the couple's cute dogs (Ariana is currently a mom to 10 rescue pups), as well as a kissing selfie.

Grande and Gomez first began dating in January 2020 and got engaged less than a year later. In May, the pair tied the knot during a private ceremony at their home in Montecito, Calif. For the wedding, Ariana opted for a strapless silk Vera Wang gown and a bow-bearing veil. She accessorized with Lorraine Schwartz teardrop diamond earrings and pulled her dark hair into a high ponytail.

"They got married," her rep confirmed to People at the time. "It was tiny and intimate — less than 20 people. The room was so happy and full of love. The couple and both families couldn't be happier." 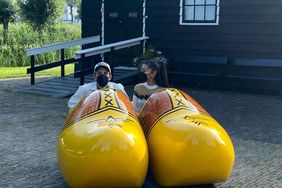 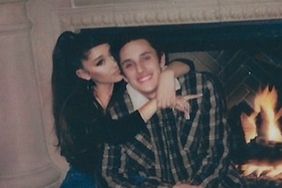