Ariana Grande's Crescent Moon Bustier Is Out of This World

Newlywed Ariana Grande may have overshadowed her latest gig with her nuptials, but fans of the superstar singer and reality TV die-hards will remember that she'll be appearing on The Voice this season as a judge/coach/inevitable winner. In a new behind-the-scenes peek at the promo involved in bringing a Grammy Award-winning star into the fold of an already-established group, Grande showed that she's not about to blend in. Instead, she's shining bright — literally — wearing a shimmering, rhinestone-embellished bustier with crescent moon-shaped cups.

In a series of Instagram images, Grande offered up an insider's view of a judges' promo video that's set to hit the internet soon. Not only is she sitting on a boudoir-appropriate moon-shaped lounger, she's shining like an actual star in the sky, something that fellow judges Blake Shelton and John Legend joke about. Grande is set to join them and Kelly Clarkson for the show's 21st season.

"hello and screaming !!!! cannot wait for everyone to see our first promo tomorrow for season 21 of @nbcthevoice !!! it's ..... the most ridiculous and fun," Grande wrote on Instagram. "i adore these humans so much and am already an emotional wreck worrying about saying goodbye to everyone the day of the finale and nothings even happened or aired yet. but yes ! tomorrow ! first promo. i love these people and this crew and my TEAM OH MY GOD and everything about this. i can't say anything else. but... simply cannot wait til we get started."

In a video clip, Grande noted that the moon does have a special meaning to her.

"I was just entering on this really beautiful crescent moon, which I love," she said. "I have a moon tattoo. It's my floating moon entrance. It felt very special."

Clarkson also teased the promo clip, which shows the judges welcoming Grande into a very authentic-looking campground. Naturally, The Voice judges would spend their time singing around a campfire complete with faux owls and burlesque-style entrance from their newest addition.

And the official Voice Twitter did offer a date for the final reveal: tomorrow. So, until then, Grande's fans will have to make do with the teasers to the main event. 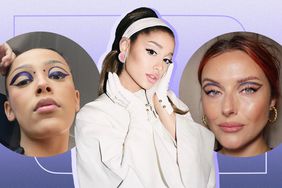