There's no denying that Anne Hathaway is a very talented actress, and today, she's celebrating her 35th birthday. In honor of the momentous occasion we're taking a look back at all the times she made us ugly cry, from her show stopping on-screen performances, to her tear-jerking Oscar's acceptance speech. She made us weep like children, and we absolutely love her for it.

Hathaway made her major break in Hollywood with the beloved movie, Princess Diaries back in 2001, as the now-legendary Mia Thermopolis, bringing new meaning to the phrase, SHUT UP. She continued to build her impressive resume with a steady stream of blockbuster hits and critically acclaimed films like Brokeback Mountain (2005), The Devil Wears Prada (2006), Rachel Getting Married (2008), Les Misérables (2012), Interstellar (2014), The Intern (2015), and Colossal (2016).

Happy birthday to the Hollywood mainstay! Take a look at her most tear-jerking moments, on and off the screen, below.

Hathaway played Jake Gyllenhal's character's wife, Lureen Newsome, in one of the most tragic love stories of our time. Seriously this movie about star-crossed gay lovers still makes us sob, every time we watch.

Hathaway gave a riveting performance, as drug-addict Kym, who comes home from rehab after nine months to attend her sister's wedding—seriously heavy stuff. She was nominated for her first Oscar for the role.

In this movie—which we thought would be a romantic comedy, but is in fact a very, very sad love story—Hathaway plays Maggie, a Parkinson's Disease patient who falls for Jake Gyllenhal, a drug rep for Pfizer in the 1990s. As Parkinson's has yet to have a cure, you can guess how this movie ends. The ending is more optimistic than heartbreaking, but bring out the tissues anyway, you'll need them for this one.

We don't want to give too much away here, as the sadded part of the film doesn't happen until about halfway through, but in this ugly-cry inducing movie, Hathaway and Jim Sturgess star as friends and sometimes lovers Emma and Dexter, who are shown on the same day every year throughout the film. If you need a good cry, this is the perfect movie to watch.

Hathaway starred as the ill-fated Fantine, who after getting fired from her job in pre-revolution era France, takes to prostitution to care for her young daughter Cosette. "I dreamed a dream of time gone by..." (sobs uncontrollably).

Her earnest acceptance speech for Best Supporting Actress, in which she was clearly on the verge of tears the entire time, had us choking up, maybe even more than her performance itself.

In this tear-jerker of a film, Hathaway played Amelia Brand, daughter of a NASA scientist who, along with Matthew McConaughey and a team of space explorers, set out to find a way for life to continue after the impending demise of Planet Earth. The happy-sad ending had us feeling all sorts of emotions, and had us crying like babies with that final shot of Brand looking hopeful (or sad, we're still not sure) on her new planet. 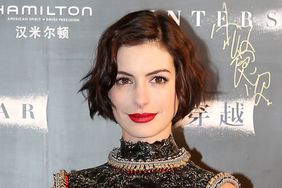