They spent hours together at an Italian restaurant.

Add one more unexpected couple to Hollywood's running list of head-scratching duos. According to Page Six, Angelina Jolie and The Weeknd (real name: Abel Tesfaye) had dinner together at Giorgio Baldi in Los Angeles, spending hours together before leaving separately.

While neither Jolie nor the Weeknd has commented on the rendezvous, a source close to the crooner note that he didn't make any effort to keep the meeting low-key. The publication shared images of Jolie leaving while shrouded in a trench coat and The Weeknd wearing a black T-shirt with a denim-and-denim combo of jeans and trucker jacket.

"They're clearly not trying to hide [the dinner date]," the source told Page Six.

The paper notes that the two might have been meeting for business and not pleasure. The Weeknd is expanding beyond music with a new HBO series, The Idol. The project, which includes co-creator Reza Fahim and Euphoria's Sam Levinson, chronicles a female singer who falls in love with a club promoter in L.A. only to find out he's the leader of a cult. The Weeknd will star in and co-produce the project. He previously appeared alongside Adam Sandler in Uncut Gems and wrote an episode of American Dad last year, so The Idol will add one more credit to his IMDb page.

Perhaps Jolie was simply offering some career advice while the two took in the chef's special at a notoriously celeb-frequented restaurant? Without confirmation from either party, there's no way to tell for sure.

The sighting comes after Jolie has been getting back in touch with her ex-husband, Jonny Lee Miller. Rumors started to circulate about the two after photographers snapped photos of Jolie leaving Miller's New York City apartment. Tesfaye was linked to model Bella Hadid in 2015 and the two were in a notoriously on-again, off-again relationship until they split for good in 2019. During one of the couple's breaks in 2017, he was reportedly dating Selena Gomez. 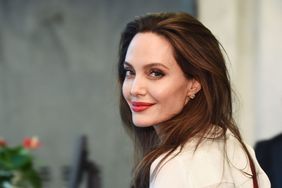