She made a rare public appearance to give a speech on gender-based violence.

Angelina Jolie made a rare public appearance to give a powerful speech on gender-based violence.

Jolie, a UNHCR Special Envoy, spoke at the 2nd International Conference on Action with Women and Peace in Seoul about the worldwide violence against women, and offered advice for any woman fearing abuse.

In video of the speech from last month obtained by Harper's Bazaar U.K., Jolie can be seen wearing a long-sleeved white top with a simple chain necklace, her hair worn down.

"The truth is, a woman's life does not rank equally with a man's, far more universally than we are willing to admit," she said. "Conflict-related sexual violence is a manifestation of this reality."

She added that governments and political leaders seem to believe in rights for women and girls "only to a point" — "it is this caring to a point that means that gender equality is still at least a century away, that domestic violence has grown sharply worse during the pandemic, and that the number of people displaced by conflict and persecution — over half of them women and children — has doubled in a decade."

According to UN Women, 243 million women and girls were abused by an intimate partner in the past year, and less than 40% of women who experience violence report it or seek help.

In an interview with Harper's Bazaar U.K., Jolie also shared advice for anyone experiencing or fearing abuse.

Angelina Jolie Has Been Working on a Secret Project

"Talk to someone," she said. "Try to find allies. Be connected for emergencies. For example, you can agree a code word with a friend or family member, which tells them if you are facing an emergency. Begin to build a network and gain knowledge. It’s sad to say, but you can’t assume all friends and family will always want to believe and support you. Often it will be strangers who help. Or other victims, support groups, or faith groups. Above all, be careful. Only you really know the danger you are in, and until you find your support outside, you may feel quite alone." 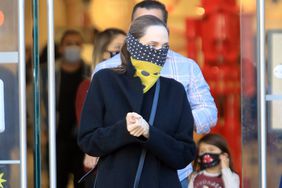