Jolie and National Geographic are drawing attention to the importance of protecting the bee population.

Angelina Jolie is raising awareness for conservation efforts with a new special photoshoot.

The actress and humanitarian posed covered with bees for National Geographic to celebrate World Bee Day, and discussed the importance of protecting the bee population.

"With so much we are worried about around the world and so many people feeling overwhelmed with bad news and the reality of what is collapsing, this is one [problem] that we can manage," she said. "We can certainly all step in and do our part."

In the photo, taken by National Geographic photographer and beekeeper Dan Winters, Jolie can be seen a white sheet as bees swarm her.

The actress has been named the "godmother" for Women for Bees, a five-year program launched by UNESCO, the UN's educational, scientific, and cultural arm, and Guerlain, to train and support female beekeeper-entrepreneurs around the world.

"I'm going to sound like my Buddhist practices, but it just felt lovely to be connected to these beautiful creatures," she said about the photoshoot. "There's certainly a hum. You have to be really still and in your body, in the moment, which is not easy for me. I think part of the thought behind it was, this creature is seen as dangerous sometimes or stinging. So how do we just be with it? The intention is we share this planet. We are affected by each other. This is what it should feel like and it really did, and I felt very honored and very lucky to have the experience."

Angelina Jolie Joked About Being Single in a New Interview

Jolie revealed that she couldn't shower for three days prior to the shoot, having been told that different scents from shampoos might confuse the bees.

"I did have one that got under my dress the entire time," she said. "It was like one of those old comedies. I kept feeling it on my knee, on my leg, and then I thought, 'Oh, this is the worst place to get stung. It's getting really close.' It stayed there the entire time we were doing the shoot. And then when I got all the other bees off, I lifted the skirt and she went away." 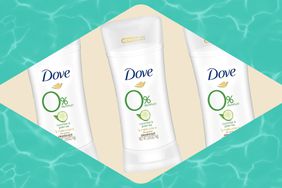 This $7 Natural Deodorant Keeps Me Stench-Free All Day Long