Jolie, who stepped behind the camera as a director in recent years, explained why she's taking more on-screen jobs.

Angelina Jolie is opening up about her decision to take on more acting jobs in recent years.

The actress and director, who stars in the upcoming Those Who Wish Me Dead, told Entertainment Weekly she made a conscious decision to take more on-screen roles for the sake of her family.

"I love directing, but I had a change in my family situation that's not made it possible for me to direct for a few years," she said. "I needed to just do shorter jobs and be home more, so I kind of went back to doing a few acting jobs. That's really the truth of it."

Though Jolie has starred in the Maleficent films in recent years and took on a voice acting role in The One and Only Ivan, in 2021, she returns to the big screen in a major way with both Those Who Wish Me Dead and Marvel's Eternals. In 2011, she directed her first feature, In the Land of Blood and Honey, and subsequently directed 2014's Unbroken, 2015's By the Sea, and 2017's First They Killed My Father.

"In very technical terms, I'm more aware of what the director needs, and what other challenges they're facing, and how many different pieces are moving," she told EW about her directing experiences.

Jolie and former husband Brad Pitt have been in the midst of divorcing since 2016. Last month, she offered to testify against him in their divorce case.

In a British Vogue interview published last month, Jolie revealed she lives five minutes away from Pitt in L.A., telling the outlet she wanted her children "to be close to their dad." 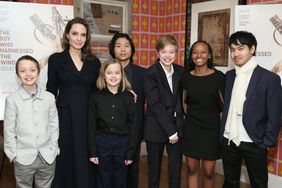