Ana de Armas does not want you to get it twisted. On Sunday, the Knives Out star posted a selfie to Instagram, and fans were quick to point out that she was wearing a necklace that both she and ex-boyfriend Ben Affleck wore during their relationship.

The necklace has half of a heart-shaped pendant, and Affleck seemingly had the other half. They've both been spotted wearing the pendant in the past, so followers started to speculate that the necklace might mean a reunion for the couple.

But de Armas was quick to shut down any reconciliation rumors. Just six hours after her first story, and the subsequent speculation, de Armas posted another story that appeared to address the rumors head on. The new face of Esteé Lauder posted a black screen with stickers and gifs that read "no," "nope," and "I don't think so."

So it seems that a reunion is not on the horizon (sorry to disappoint). The two ended things mid-January, allegedly by phone.

"Ben is no longer dating Ana," a source told People at the time. "She broke it off. Their relationship was complicated. Ana doesn't want to be Los Angeles based and Ben obviously has to since his kids live in Los Angeles."

Another source added that the split was mutual saying, "This is something that was mutual and something that is completely amicable. They are in different points in their lives; there is deep love and respect there. Ben continues to want to work on himself. He has three jobs lined up and he's a solid father at home. They are both happy with where they are in their lives." 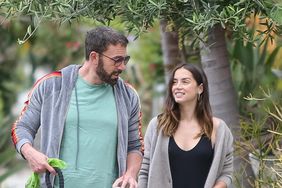