Finally, a celebrity dressing for the weather.

Celebrities are infamous for never wearing weather-appropriate clothing — Katie Holmes once wore a blanket in 90 degrees and Dua Lipa has donned crop tops and bustiers in the middle of winter. But Ana de Armas just arrived to the Venice Film Festival aptly dressed for the temperature — finally.

On Wednesday, the actress docked the iconic water taxi that's become synonymous with the festival and stepped out in a business-chic ensemble that appropriately coordinated with the elements. She wore a royal blue Louis Vuitton short-and-blazer suit with gold buttons and black-and-white stripe accents on the shoulders. She layered the jacket over a simple black tank and finished off the look with matching lace-up strappy stilettos and a gold pendant necklace. Her dark hair was parted down the middle and gently tousled.

De Armas is attending the famous event to promote her upcoming Netflix film Blonde, which will follow the turbulent life of Marilyn Monroe. The actress even appeared to arrive in character, blowing a kiss to onlookers from the boat. In a recent interview with L'Officiel, de Armas spoke about portraying the Hollywood legend, saying that her "job wasn't to imitate her." The actress explained, "I was interested in her feelings, her journey, her insecurities, and her voice, in the sense that she didn't really have one."

She also revealed that she was puzzled by the movie's NC-17 rating, the first piece of content on the streamer with that title. "I didn't understand why that happened. I can tell you a number of shows or movies that are way more explicit with a lot more sexual content than Blonde," she told the publication before adding that the entire cast and crew knew they had to go to "uncomfortable places" for the sake of the film. "But to tell this story it is important to show all these moments in Marilyn's life that made her end up the way that she did. It needed to be explained. Everyone [in the cast] knew we had to go to uncomfortable places. I wasn't the only one." 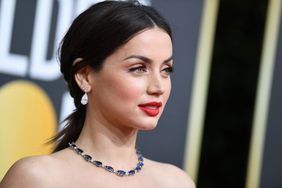