Former model Amy Dorris says Trump forced his tongue down her throat and groped her at 1997 U.S. Open.

Former model Amy Dorris has come forward with an allegation of sexual assault against President Donald Trump, making her at least the 26th woman to publicly accuse Trump of sexual misconduct. In an interview with The Guardian, Dorris said that Trump sexually assaulted her at the US Open tennis tournament in 1997, when she was 24 and he was 51.

Dorris told The Guardian that he forced his tongue down her throat and groped her, holding her in a grip she couldn't escape from — leaving her feeling "sick" and "violated."

"He just shoved his tongue down my throat and I was pushing him off," she said. "And then that’s when his grip became tighter and his hands were very gropey and all over my butt, my breasts, my back, everything. I was in his grip, and I couldn’t get out of it. I don’t know what you call that when you’re sticking your tongue just down someone’s throat. But I pushed it out with my teeth. I was pushing it. And I think I might have hurt his tongue."

The Guardian reported that Dorris provided them with evidence to support her account, including her ticket to the U.S. Open as well as six photos showing her with him over several days in New York. Her account was also corroborated by people she confided in about the incident, including her mother and a friend in New York.

Donald Trump Kept a List of Women Who Refused to Date Him, According to His Niece’s Tell-All

"He came on very strong right away," Dorris recalled. "It seemed typical of a certain guy, people who just feel like they’re entitled to do what they want … even though I was there with my boyfriend."

She said her boyfriend at the time, Jason Binn, took her to meet Trump at his office in Trump Tower in Midtown Manhattan during a long weekend in the city before they went together to the US Open in Queens. She claimed the alleged incident happened when she, Binn, Trump, and other friends of Trump were in his private box at the event. She got up to go to the bathroom, she said, which was hidden behind a partition wall a few feet from where Trump’s guests were watching tennis. When she came out, Trump was waiting outside.

"Initially I thought that he was waiting to go to the bathroom, but that wasn’t the case, unfortunately," she said, adding that Trump forced himself on her after a brief exchange in which she recalls nervously laughing and telling him. "No, get away."

She said she told Trump, "no, please stop" but "he didn’t care."

"I just kind of was in shock," she added. "I felt violated, obviously. But I still wasn’t processing it and just was trying to go back to talking to everyone and having a good time because, I don’t know, I felt pressured to be that way."

The Guardian reported that via his lawyers, "Trump denied in the strongest possible terms having ever harassed, abused or behaved improperly toward Dorris."

If you have experienced sexual violence and are in need of crisis support, please call the RAINN Sexual Assault Hotline at 1-800-656-HOPE (4673). 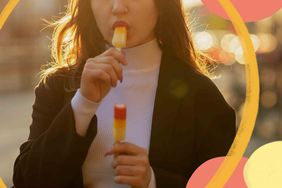