We talked to Tatum at a pivotal time in his life. Newly married, the guy who played street-smart types was showing his weepy side in the romantic film Dear John, opposite Amanda Seyfried. Had his new bride pilfered any of his clothes yet? "There are times when something like a pair of sweatpants or a holey T-shirt I've had for 15 years goes missing," he said. "Then all of a sudden she'll walk downstairs wearing it."

Never one just to rest on his basketball laurels, our inaugural Man of Style was staring in the film Space Jam at the time. "I get manicures every 10 days, pedicures once a month," he told us. "Maybe 20 years ago, I would've thought, 'That's feminine.' But men have needs as well."

Following his American film debut as Wolverine in X-Men, Jackman was just kicking off his leading-man status with Kate & Leopold. "I'm not a big, flashy, I'm-wearing-designer-clothes kind of guy," he said, naming Carey Grant as his style icon. "That's my Australian family upbringing. If I'm getting dressed up I prefer more formality (like) the late-19th-century things I had to wear in Kate & Leopold."

In 1997, Lauer had taken the reigns as co-anchor of the Today show and admitted his lust for classic clothes. "It doesn't pay to look trendy," he said. He even shared his prom getup: "A white tuxedo with a powder-blue ruffled shirt and white tie. I look at pictures now and say, 'How long is the geek convention in town?'"

Once a trouser-dropping hip-hopper and Calvin Klein billboard hottie, in 1997 Wahlberg was getting attention for his acting chops. Asked about trading the baggy Marky Mark look for Armani and Gucci he said, "It just wasn't that comfortable anymore. You've got to dig past your knees to reach in your pocket."

For his Man of Style, Baldwin was promoting the TNT TV film Nuremberg and waxing poetic about politics, the environment, World War II history, and hair gel. "You know who makes the best hair gel? Frederic Fekkai," he said. "The second best is KMS. And in London there's a hairstylist who makes a great gel, Charles Worthington. Those are my top three gels."

When we talked to Reynolds, the guy seemed to be everywhere (in The Proposal, Adventureland, Fireflies in the Garden, and X-Men Origins: Wolverine, to name a few). "In elementary school, I had the Zellers (Canadian Wal-Mat) version of Michael Jackson's red leather 'Thriller' coat," he told us. "The thing was made of solid plastic and cost 12 bucks. I wore it every day and was mocked relentlessly, but I loved it. I wanted to sleep in it."

Just off the mega-success of A Time to Kill, McConaughey talked to us about his new romantic comedy The Wedding Planner, opposite Jennifer Lopez. Asked about his Hollywood style influence he said, "The Incredible Hulk. I liked how he turned green a few times each show. He's cool-shorts, no shoes, no shirt!"

A 22-year-old Efron had finished his colossal High School Musical run and was about to star in Charlie St. Cloud when he did his Man of Style. "Your clothes are the middle ground between who you are and what you want to show people," he said. "I never like to look sloppy, because as somebody in the public eye, I believe I owe it to fans to be presentable when I go out. It's like, 'What would Frank Sinatra do?'"

A song and dance man, Diggs had wowed on TV's Ally McBeal, in the Broadway hit Rent, and was about to wow some more in the film adaptation of Chicago. As smooth as he seemed, he shared a secret with us: "Inside, I am still a nerd who couldn't get girls in junior high school."

The Grammy-winning R&B star Usher Raymond IV was releasing his latest album Confessions when he chatted about his lust for fashion (which included a 10,000-pair shoe collection). "I do have my own tailor because I like to design my suits," he said. "Going to a tailor (for the first time) is like finally flying first class or chartering your own plane. You don't want to go back to coach."

Jay-Z was already a superstar with 12 albums, three Grammys, a Rocawear and Shawn Carter clothing line, and 20 million record sales when he talked to InStyle. "Hats give you attitude," he said, "You could be the squarest guy in the world, but if you wear your hat to the side, it gives you swagger."

A somewhat anonymous Stewart had just taken over the anchor desk of The Daily Show when we sat down with him. "Somebody once told me, 'Simplicity is the essence of vogue,' and I would have to agree," he said. "I know how to wear a suit, I just don't own 20 of them...and I never wear anything double-breasted-takes too long to button."

Neeson was promoting Kingdom of Heaven and Batman Begins when we got the goods on his style. "I do love good shoes," he told us. "I'm not good at running around in sneakers. Today I love handmade Italian shoes. I have a pair so beautiful that I'm almost scared to wear them."

When we spoke with Mayer, he was leaving the pop genre for a more bluesy sound with his album Continuum. "I met Paul McCartney one night in the studio-the man was wearing $1.85 worth of clothes. It was one of the most genius things I'd ever seen," said the Grammy-grabbing singer-songwriter. "Because what the hell does he have to prove? He's got to cover himself up so he's not naked. The end."

Back in 1965, Mick Jagger was so influential to young people that Britain's key fashion magazine at the time, Tailor and Cutter, begged him to start wearing neckties to "save" the industry. "The trouble with a tie," said the famously open-shirted Jagger, "is that it could dangle in the soup." He spoke with InStyle just before The Rolling Stones' Forty Licks tour.

At the time, Rudd was reuniting with his Clueless writer-director Amy Heckerling (who gave him his breakthrough role 11 years earlier) and staring in I Could Never Be Your Woman. "I focus more on accessories," said Rudd. "Jennifer Aniston bought me a pair of beautiful antique gold cuff links when we wrapped Object of My Affection. Actually I'm not so interested in them. I just wanted to name-drop."

Funnyman Fallon had just turned 30 and was flying high with an Emmy award (for SNL, a show he just left) a Grammy nod for his comedy album, and a staring role in the movie Taxi. "I've had many fashion disasters," he admitted. "I'm glad I had my sister...someone who'll tell you when you're lame. Like when you're getting ready to go to school, and you're like, 'This bandanna is cool, man!'"

When he talked to InStyle, Cooper was just beginning to land leading man roles in films like He's Just Not That Into You. "When I was a kid, my mom took me shopping a lot. I hung out at the makeup counter asking pretty women for kisses," he said.

Promoting the release of his album Unorthodox Jukebox, the Grammy-winning, platinum-selling singer-songwriter and pompadour king told us about his laidback new style and his childhood attire. "I remember getting picked on in elementary school because it's hot in Hawaii, but I had a thing for these flannels," he said. Everyone would show up in surf shorts and a tank top, and I'd be in plaid." 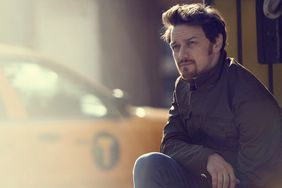 Man of Style: James McAvoy May Have a Filthy Mouth, But All We Can Focus On Are His Soulful Blue Eyes 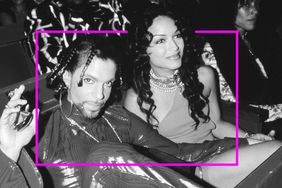