And it only takes 30 minutes.

Ah, the needle. In the world of aesthetics and beauty, it holds so many beneficial purposes.

Dermatologists and plastic surgeons count on these tiny, slim pieces of metal for anything and everything imaginable. They allow for precise placement of dermal fillers and injectables under the skin, creating micro-injuries for collagen stimulation in procedures like micro-needling, and even deliver fat-dissolving and cellulite-reducing solutions like Kybella and QWO, respectively. Now, the versatile needle has yet another purpose.

Enter: Micro-coring, a brand new FDA-cleared technology that uses hollowed-out needles to non-surgically remove pieces of loose skin without the need for plastic surgery. That's right, dermatologists and plastic surgeons can now permanently eradicate loose skin without a single cut or stitch — and it's unlike anything else we've seen.

If going under the knife is not an option, micro-coring can improve mild to moderate skin laxity and sagging along the jawline, cheeks, jowls, and chin. The stainless steel micro-needles used are so tiny (22 gauge), so there's no visible scarring involved, either.

According to Dr. Shamban, micro-coring technology was developed from observations of surrounding skin-tightening and shrinking when removing small amounts of skin. "By extracting micro-cores of skin, around eight percent, there is the added value of an almost immediate close of the skin and full healing over several days," she says.

While some may think of micro-coring as a scarless facelift or a modern-day alternative to facial plastic surgery, Dr. Jason Pozner, a board-certified plastic surgeon in Boca Raton, says it is not. "A facelift reshapes the underlying tissues and removes extra skin but does not rejuvenate the skin itself," he says. "With micro-coring, we can get rid of some of the excess skin on the face without scarring, and the micro-punctures help renew the skin." However, a facelift will always generate a more dramatic result than any minimally-invasive device.

What Can You Expect From Micro-Coring?

Before committing to micro-coring (or any procedure), a consultation with your doctor is step one. If you're a suitable candidate for ellacor, your doctor will administer lidocaine injections and injectable anesthetics to numb the treatment area and make the procedure as comfortable as possible.

Next, your doctor will place the ellacor handpiece directly over the loose skin, and the needles will quickly punch out tiny pieces of skin (they are so small that they're invisible to the naked eye). Then, the device will suction out the removed skin. The procedure can be dialed up or down depending on the depth needed to gain the desired results.

Immediately following the 30-minute treatment (most patients need three sessions at least one month apart), you can expect some bleeding, scabbing, residual redness, and minor bruising and swelling. Unlike a lunchtime procedure, you'll need to lay low for about three days since there is some downtime, but Dr. Pozner says pain is rarely an issue after micro-coring.

While the skin is recovering, it's best to avoid using harsh acids and exfoliators until your doctor gives you the green light to resume your regular skincare routine. Instead, opt for a mild cleanser, like Alastin's Ultra Calm Cleansing Cream, a light non-comedogenic moisturizer such as the Avène Cicalfate Post-Procedure, and sunscreen, like EltaMD's UV Physical Broad-Spectrum SPF 41.

Ellacor results aren't immediate, but some patients see a noticeable difference in the degree of laxity after one treatment. Over the next few months, the skin becomes visibly tighter and smoother with fewer lines and wrinkles, especially on the jawline, cheeks, jowls, and chin.

VIDEO: This Non-Invasive Treatment Can Give You a Permanently Sculpted Jawline in Just a Few Months

Who Will Benefit The Most From Micro-Coring?

There's always a level of expectation with noninvasive and minimally-invasive procedures. If you're anticipating skin that rivals the tightness of a facelift, this treatment probably isn't for you — nor will anything else besides surgery be.

Micro-coring serves a purpose for those who are not candidates for surgery, don't have the time to recover, or don't want to invest the time, energy, or money into plastic surgery. "Many patients benefit from micro-coring, like the patient who is bothered by wrinkles yet not ready for surgery," says Dr. Pozner. Most doctors recommend micro-coring to patients ages 40 to 50 who are starting to notice loose skin and want to stop it before it gets ahead of them.

As with so many technologies available today, the treatment's success depends on skin quality. Micro-coring works best on mild to moderately lax skin and wrinkles on the lower face. If there's too much loose skin, the procedure won't lend a dramatic enough effect and may leave those patients unhappy with their results. On the other hand, too little loose skin won't produce much effect. Dr. Shamban adds that micro-coring is inappropriate for anyone with paper-thin or extremely thick skin.

Ellacor has only been clinically validated on those with Fitzpatrick skin types I – IV, so Dr. Pozner says anyone with a history of severe scarring or hyperpigmentation should be cautious. Additional studies are in the works for darker skin tones.

How Long Do Results From Micro-Coring Last?

Any procedure or treatment that stimulates collagen production and improves the skin's quality will improve the overall progression of aging. "We know that early intervention and prejuvenation are key in how we age," says Dr. Shamban.

"Early use of combination therapies will support tissue health, the repair and remodeling processes, and maintain collagen levels and elastin production," Dr. Shamban says. Skin that boasts healthy, strong collagen and elastin is firmer and more resilient than damaged collagen. So, adding micro-coring to an anti-aging regimen will produce noticeable results and better future aging.

Micro-coring has its place in the doctor's toolbox and offers another avenue to eliminate loose skin without going under the knife. But will it make the facelift a distant relic of the 21st century? Probably not, especially since no minimally-invasive treatment is a direct shoo-in for plastic surgery or provides an apples-to-apples result. 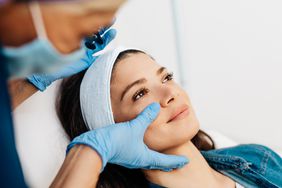 Everything You Want to Know About Getting Your Fillers Dissolved, Explained 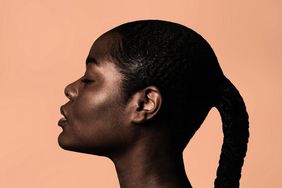 10 Ways To Get a More Sculpted Jawline

Sylfirm X May Be One of the Best Treatments for Melasma On the Market
The New Anti-Aging Glossary: Every Term to Know, From Buzzy Ingredients to the Latest in Tech and Treatments

How to Get Rid of Keloid Scars, According to Experts