"She likes the grit; she likes [her makeup] to feel like an emotion," says Sarah Tanno.

Sarah Tanno has created every iconic Lady Gaga look in recent memory, be it the star’s crystal-studded Super Bowl eyes in 2017 or her inspired David Bowie tribute at the 2016 Grammys. So, what does it take to reach that stratospheric success? “It wasn’t easy,” Tanno says. “People think you just get lucky and find that one person ... [laughs] I didn’t make money for the first 10 years of my career. I’ve had to move home and start over again. I’ve been a waitress, bartender, club promoter — I’ve done it all. But [makeup] is not just part of my job; it’s a part of me. It runs in my veins. It’s who I am. I dream it. I wake up and do it. That’s what you have to know if you want it at this level. Otherwise it’s not going to work.”

Tanno developed her strong work ethic as a teen horseback rider in Chesterland, Ohio. “I started working at 12, shoveling horse shit so I could pay to board my horse and ride in shows,” she says. But the costs were high — to her bank account and social life. “Before and after school everything revolved around riding and showing. I only had friends who grew up at the barn.” Once high school approached, Tanno traded in her equestrian hobby for another. “I’d do my makeup differently every day with this one CoverGirl palette,” Tanno says. “People started to notice and would ask me to do their makeup for dances. It became an opening for me to make friends.”

When she eschewed college for cosmetology school, she was determined to learn “every aspect of makeup — television, film, special effects, photography, lighting.” While at school in Florida, Tanno met Chadwick Tyler, a photographer who became an early champion of her work. “The first time I shot with him, I spent so long perfecting beautiful smoky eyes on the models. Then he took the models, put them in the shower, turned the water on, and said, ‘Don’t touch it. You have to learn how to let it go. Perfect isn’t beautiful all the time,’ ” Tanno says. “He taught me the greatest lesson I’ve ever learned.”

Tanno eventually moved to L.A. and met a music manager who put her in touch with Fergie; she and the singer worked on a few looks, but a personal setback forced Tanno to go back home in the early 2000s. Two years later, Tanno decamped to New York, where she reconnected with Tyler and hustled, doing campaign and editorial work. Then, on the night of the 2009 MTV Video Music Awards, she first set eyes on Lady Gaga, whose bloody, theatrical performance made an impression: “The next day I told my friends I would die to work with her.” Minutes later, Tanno received a Facebook message from Lady Gaga’s manager, who’d collaborated with Fergie years ago, offering Tanno a meeting. Tanno began working with Gaga and soon was up for the job as her 2009 tour artist, but got the role of makeup artist to the backup dancers instead.

Dead set on proving herself, Tanno continued studying and perfecting sweat-proof stage makeup until, five years later, she got an- other chance to do Gaga’s makeup. “By then I’d gotten so much better,” she says. “From that day forward, I’ve done every single look on her.” While Tanno can craft everything from crystal lips to ombré eyes, she knows perfection isn’t always the goal. “Gaga likes it better when I put on her makeup in five minutes with two products than when I spend an hour on it. She likes the grit; she likes it to feel like an emotion.”

Tanno’s extensive training also paid off in the form of an Emmy Award for outstanding makeup on the television show American Horror Story: Hotel. “We spent three months tailoring looks to create the Countess character,” says Lady Gaga’s hairstylist, Frederic Aspiras. “The looks spanned over a century of makeup and hairstyles. It was one of the most rewarding moments of our career as a team.” The Countess’s bleached brows and blood-red lips also caught the attention of designer Marc Jacobs. “He flew me to New York, and I became the artistry ambassador for Marc Jacobs Beauty,” Tanno says. “The only thing that could maybe top that is creating a makeup brand with your best friend.” And that’s exactly what she did.

Last year Tanno and Gaga launched Haus Laboratories, a glittery, pigmented trove of slick glosses, budge-proof liners and shadows. But their relationship goes beyond glam: The singer happily stood up as a bridesmaid in Tanno’s 2019 wedding. “Gaga and I have the same aesthetic and feeling toward beauty,” says Tanno, the brand’s global artistry director. “It comes from a place of story- telling and of empowerment.”

Get Her Signature Look

Tanno likes this tool to sculpt and de-puff the face. But, she says, “if I don’t have it, I’ll just put two spoons in the refrigerator or a bowl of ice and use those.”

Our liquid eyeliner is the easiest,” she says. You can drag it on its side or stamp it along the lash lines if you’re not comfortable tracing with the fine tip. Even better: Have some fun playing with these genius adhesive wings.

Tanno always scrubs lips before layering on matte color. And with these crayons, you won’t get any feathering or bleeding outside the lines. 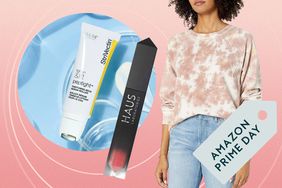