Pretty for a Dark-Skinned Girl

InStyle's Fashion News Director Eric Wilson and Fashion & Beauty Editor-at-Large Kahlana Barfield will be discussing her personal essay below about how she cultivated self-love in the face of persistent colorism, live on Facebook March 24 at 3 p.m. EST. Tune in and have your questions ready! This feature originally appeared in the April issue of InStyle. For more stories like this, subscribe to the magazine now.

Posters. In middle school my bedroom walls were covered with them. Literally, from top to bottom. R&B stars mostly. I'd lie on my bed listening to music and stare at them for hours. Janet Jackson. TLC. Aaliyah. All of them pretty. All of them successful. All of them light-skinned. Besides my family, these were the women I idolized. I bought their albums. Mimicked their dance moves. And tried my best to duplicate their wardrobes. I wanted to be just like them. But every time I looked in the mirror, I was reminded I wasn't. My nose was wider. My lips were fuller. And my skin was darker. Much darker.

I'll never forget the day I was formally introduced to colorism (i.e., prejudice or discrimination against individuals with darker skin tones, typically among people of the same racial or ethnic group). I was in the seventh grade. I thought an upperclassman I had a crush on was paying me a compliment. "You're pretty," he said. Before I could fix my lips to say thank you, he finished his sentence: "for a dark-skinned girl." I'd never felt so humiliated and degraded in my life. Crazy thing is, the guy who made the comment was darker than me. I couldn't understand it. Why couldn't I just be pretty? Why did I have to be pretty—for a dark-skinned girl? I was on the honor roll. Captain of the cheerleading team. And none of it seemed to matter. He couldn't see past my complexion. In fact, a lot of guys couldn't. Time and time again, I was overlooked in favor of my lighter-skinned besties. I'd be lying if I said it didn't affect me. I just chose not to let it define me.

I wish I could say that that day back in middle school was the last time I heard the phrase "pretty—for a dark-skinned girl." Sadly, it wasn't.

From that day forward I consciously began to mask my insecurities with fashion. My sense of style would take on a life of its own. I made my own clothes. Wore my nails long and dramatic. My hair was ever-changing: braids one day and a bob the next. My style had become a big part of my identity. I used my uniqueness to amplify my beauty. I became popular for "being myself." But still, I couldn't help but wonder why my skin color was viewed by many as inferior to that of my lighter-skinned friends. Why wasn't there one celebrity in the limelight as dark as me who was considered beautiful? On the outside I appeared as confident as anyone, but inside I had to do some serious soul-searching and reflect on what exactly beauty meant to me.

In college at Howard University, I learned in an African-American history class that colorism has been around since long before I felt the sting of that boy's backhanded compliment. During the 18th and 19th centuries, darker-skinned slaves were forced to work in the field, whereas their fair-skinned counterparts had the "privilege" of working indoors. Even as recently as the 20th century, African-American fraternities and sororities would use what was called a "brown paper bag test" to determine whether a person could join their organization. If you were darker than the bag, you were denied. It's heartbreaking to think that if I had attempted to pledge a sorority back then, I would have been denied simply because my skin was too dark.

Thankfully, I was raised in a household where I was taught to be proud of my skin tone. "Black is black," my grandmother would say. "And your black is beautiful." My parents had three daughters. My older sister and I have similar complexions, but my younger sister is a shade or two lighter. So whenever we'd step out together, it was only a matter of time before colorism reared its ugly head. "The baby girl is the cutest of the bunch," people would casually say. My little sister, who never wanted to be viewed as "better" or different from the two older sisters she revered, began to feel uncomfortable in her own skin.

As a young girl it's hard not to internalize these messages. But when there's no Barbie doll that looks like you, it's difficult to find beauty in your own reflection. What do you do when even some members of your peer group feel that in order to make it in corporate America you need to straighten your hair instead of wearing it natural? I had to make a decision. In the end, what felt right for me was accepting myself for who I am and establishing my reputation based on my character and the merit of my achievements.

I've interviewed our current cover girl, Lupita Nyong'o, many times, and we've had long conversations about growing up dark-skinned. Although she was publicly recognized as beautiful from the moment she broke out with her Oscar-winning role in 12 Years a Slave, she, like many of us dark-skinned women, also felt insecure about her complexion when she was growing up. "It wasn't until I saw model Alek Wek in a magazine that I thought I was pretty," Nyong'o told me once. "I had never seen anyone who looked like us lauded as beautiful by the international media; it floored me when she hit the scene." Now Nyong'o is having that same impact on girls today. The moment she was named the first black face of Lancôme, the news went viral on social media. "I feel I'm in a place of privilege—an important place, considering how media consciously and subconsciously affects how we feel about ourselves," she told me. "I'm particularly honored to be a role model for girls with my skin color—to help them feel more beautiful and validated."

I have worked as an editor at InStyle for many years, and I was moved to tears when Viola Davis was booked for our cover this past January. Although InStyle is dedicated to promoting a diversity of images (five out of 12 of our covers in 2015 were women of color), Davis hit home for me. I see myself in her beauty.

Here's How Viola Davis Got Ready for the 2016 Golden Globes

Last September I read an article in The New York Times about Davis being cast for the leading role in How to Get Away with Murder: "The actress doesn't look at all like the typical star of a network drama," the writer pointed out. "Ignoring the narrow beauty standards some African-American women are held to, [Shonda] Rhimes chose a performer who is older, darker-skinned, and less classically beautiful than Kerry Washington, or for that matter, Halle Berry." To me this was the quintessential example of colorism.

What makes a person "classically beautiful"? In middle school, I couldn't answer that question. But this morning, when I looked in the mirror, I was staring at the answer. Beautiful is unapologetically chocolate skin. My grandmother's full lips. My mother's high cheekbones. My father's light-brown eyes.

Moreover, beauty transcends physical features. When you know who you are on the inside, it radiates on the outside. That's what makes you beautiful. Not just beautiful for a dark-skinned girl—but beautiful as a person. And I don't need a poster on my wall to prove that.

Full-spectrum, nongreasy, and most of all, completely sheer without leaving skin looking chalky ($90; lamer.com).

A richly pigmented formula that melts into skin for a velvety, flawless finish ($38; jaymanuelbeauty.com).

The perfect mix of gold and bronze tones to create a gorgeous sheen without overpowering the face ($38; sephora.com). 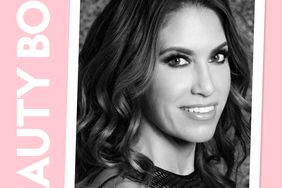