THE STYLE A chunky, textured plait pulled onto one shoulder

WHERE The 23rd Annual Kid's Choice Awards in Los Angeles

WHY WE LOVE IT Selena Gomez has played with extra-long extensions, a curly bob, and nearly every style in between, but this trendy style, created by hairstylist John D, is one of her most sophisticated yet. Opposite the braid, her face-framing layers become part of the look as her slightly lifted roots keep the style from feeling too traditional.

THE STYLE A swingy, below-the-chin crop with chunky cinnamon highlights

WHY WE LOVE IT Back in September, Tyra Banks announced she'd be ditching her weave in favor of natural strands. The result, seven months later? A straight and glossy cut that's healthier-and chicer-than we ever anticipated.

WHY WE LOVE IT When it comes to her style, Emma Watson has it all figured out, which is why it's no surprise her hair color is equally as sophisticated. Not quite a blond, brown or red, the earthy, nuanced shade is just plain chic.

THE CUT A chin-length crop styled in chunky, rounded spirals

WHY WE LOVE IT Jennifer Love Hewitt's new above-the-shoulder cut is shapely, voluminous and incredibly modern. And we don't care if it's a breakup haircut or not-as far as we're concerned, it's just incredibly chic.

WHERE A Padres Contra El Cancer event in Burbank, California

WHY WE LOVE IT First of all, the new ginger wash of color on Eva Longoria Parker's hair is vibrant, glossy and incredibly flattering against her bronzed complexion. We also can't get over the way the loose barrel curls manage to be shapely and full of movement all at once.

THE STYLE Extra-long hair with plenty of high intensity shine

WHERE An appearance at Walgreens promoting QuickTrim in Miami Beach

WHY WE LOVE IT Kim Kardashian has a scent, a skincare line, and a diet system, but this beauty maven knows a thing or two about good hair, too. For extra shine, dose wet strands with an argan oil based serum-the miracle ingredient boosts luminosity, protects against UV-damage and strengthens the hair with just a few drops.

THE STYLE Face-framing layers, a zig-zagged part and a low, rumpled bun

WHERE The 24th Genesis Awards in Beverly Hills

WHY WE LOVE IT Kristen Bell's effortless look could transition flawlessly from day to night. The front layers keep it playful and simple, while the slight height at the crown adds a touch of glamour.

WHERE At ShoWest in Las Vegas

WHY WE LOVE IT Earlier this month, we gave you the inside scoop on Katherine Heigl's bold new hair color. Now we're excited to see the star's taking her transformation one step further by adding below-the-shoulder extensions. One reason her new look works so well? Her eyebrows have also been darkened to match her brunette strands.

WHERE The premiere of The Runaways in New York City

WHY WE LOVE IT Dakota Fanning's easy blowout is a reminder that when you've got gorgeous hair color and a flawless complexion, you don't need an overdone style to turn heads. To smooth any extra lift at your crown, try working styling gel into your roots when your hair is still wet. The new formulas banish puffiness without leaving behind any flaky, crunchy residue.

WHERE A Shopbop dinner in Beverly Hills

INSIDE SCOOP "I just bleached out my tips," Lauren Conrad told us this week. "I have to do things gradually-I'm kind of going for that ombre effect." We love the look and were equally as psyched to see the return of the star's signature hairline braid.

THE STYLE Breezy, piecey waves pulled to the side with bobby pins

INSIDE SCOOP "Jennifer Aniston's dress was so sexy, we went with a messier, tousled wave to play with that," said her hairstylist, Chris McMillan. He let the hair dry naturally, then shaped a few sections with a blow dryer before adding a cocktail of mousse and beach spray for separation. "I parted the hair on the side and crisscrossed a small section with bobby pins," he said. "We've really been shaking up her look lately and it's been fun!"

THE STYLE A simple down 'do with a gentle hairline twist

WHERE The 27th Annual PaleyFest in Los Angeles

WHY WE LOVE IT She may play a ruthless cheerleader on Glee, but Dianna Agron's twisted back style was anything but hard-edged. It's easy to pull off, too: Part your hair on the side, roll back a one-inch section along your scalp and secure with a bobby pin behind your ear.

THE STYLE A nuanced mix of spicy brown and champagne blond

WHERE The 27th Annual PaleyFest presents FlashForward in Beverly Hills

WHY WE LOVE IT Gabrielle Union's tone-on-tone shades have plenty of depth and shine. Heavier streaks frame her face while subtle ribbons of color add intensity throughout.

INSIDE SCOOP For Jessica Simpson's look, stylist Ken Paves worked shine serum into damp hair before straightening with a dryer and a paddle brush. "Once the hair was smoothed out, I used a one inch iron and curled it from mid-shaft down for a looser, more controlled effect," he said. He brushed through the spirals, added another dose of shine serum and finished with hairspray. "She loved it and so did I!" Paves said.

THE STYLE A chunky, oversized bun perched at the crown

WHERE A Chanel dinner in Los Angeles BR]
WHY WE LOVE IT Emma Roberts's high knot is striking, shiny and not a bit stiff or formal. The swept-up style accentuates her nuanced honey and caramel highlights and shows off her fresh, springy makeup.

THE STYLE Loose and piecey tendrils with plenty of shine

WHERE The Vanity Fair Oscars Party in Los Angeles

INSIDE SCOOP "Basically Kate Beckinsale's got beach waves, but without the matte finish some salt sprays leave behind," explains Frederic Fekkai stylist Adir Abergel, who created the look. He blew the hair dry, doused the ends with a shine-enhancing cream, then went through with a small curling iron to crimp and wave it. The heat played double-duty to lock in gloss and shape the strands.

WHERE The 2010 Academy Awards in Hollywood

INSIDE SCOOP When it comes to her hair, Kristen Stewart may be young Hollywood's edgiest star. For Oscars night, Frederic Fekkai stylist Renato Campora played-up that image with an intricate but sophisticated style. He waved the hair with a one-inch curling iron, then braided small sections starting at mid-shaft. He left the ends of the braids undone, gathered them into a low chignon and pinned in place. The result? "A modernalook with a young vibe," says Campora.

THE STYLE Touchably soft and structured spirals pulled onto one shoulder

WHERE The 2010 Oscars in Los Angeles

INSIDE SCOOP 2009 was Kate Winslet's Oscar year, but her 2010 look was downright award-worthy. Frederic Fekkai stylist Renato Campora mixed volumizing mousse and silkening cream to give the hair a strong foundation before parting it on the side and blowing dry. With a one-inch curling iron, he created soft waves and set them with a blast of strong hold hairspray. "She's like a modern day Veronica Lake," said Campora.

THE STYLE Piecey eyelash-grazing bangs pushed off the face

WHERE The Vera Wang store launch in Los Angeles

INSIDE SCOOP Reese Witherspoon's look, created by stylist Cervando Maldonado, was classic Reese: Simple, understated, but entirely flawless. "I used a smaller round brush to shape her bangs around her face and a bigger one through the length," said the stylist. He also coated the ends with a silkening cream before locking in shine with a flatiron.

THE STYLE A center-parted style pulled into a low, delicately curled pony

WHERE A Vogue/Vera Wang dinner in Los Angeles

WHY WE LOVE IT Mila Kunis's look, created by Tresemme stylist Mara Roszak, is a romantic and princessy without being one bit prissy. The ponytail's spiral is loosened just so; the single cheek-grazing tendril adds a hint of playfulness.

WHERE The Stylist Project Exhibition in Los Angeles

INSIDE SCOOP You may not be able to tell from looking at this snap of Ginnifer Goodwin, but the Big Love star just got a haircut! "Her bangs used to fall below the nose," says her stylist, Anh Co Tran. "Now they're actually above the eyebrow, which is a really pretty length." He arranged them on her forehead with a touch of styling wax. "You want to go really light with product when you have hair this short," he says. "You still need a little volume at the crown so the style doesn't look weighed-down."

THE STYLE Brushed back strands with airy, unkempt texture

WHERE A Marchesa event at Cecconi's restaurant in Los Angeles

WHY WE LOVE IT Camilla Belle is a master of sophisticated looks and this free-spirited one by stylist Gio Campora was no exception. Unlike some face-covering down 'dos, this combed back style opens up her features in a flattering, uber-confident way.

WHY WE LOVE IT Naomi Campbell's bangs may be thick, but they're anything but overpowering. The textured, cut-into ends give them movement; the slightly uneven shape keeps them entirely modern. 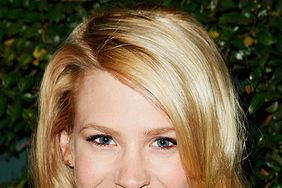 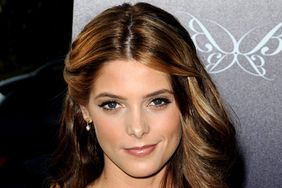