The look has taken over runways and red carpets.

With masks becoming just as essential as your keys and wallet, lipstick has taken a backseat to eye makeup over the past year. And if runways and red carpets are any indication, super bold looks are about to be everywhere.

While both the Dior and Chanel show embraced early '00s tightline eyeliner last season, this year the two fashion houses put a punk spin on their runways — as did Givenchy and Versace. Then, makeup artist Ernesto Casillas created an '80s-inspired punk look for Doja Cat at the 2021 Grammys. So expect to see the style a lot more often from here on out.

Of course, this look isn't going to be everyone's cup of tea (especially for everyday wear), but the beauty of makeup is that you can play with the intensity to make it work for you.

We're just here to give you a little inspiration — whether you prefer a smoky eye, intense liner, or want to add in a little color.

The smoky eye finish was seen both on the Dior Fall 2021 Ready-to-Wear runway this season as well as on musician Doja Cat at the 2021 Grammys.

"My idea was to make it look a little more rebellious," the makeup artist told InStyle over Zoom. "And punk is [about rebellion]. Now if I went more spiky, it would have become a bit more punk-new wave. If I had added mascara, it would have been more of a sexy eye. If I had used a satin finish, it would be more sultry. The finish gives your smoky eye an identity."

The makeup artist focused on using the single eyeshadow around the corners of the upper eyelid, then used the liner to carry the color around the eye, giving off a rectangular, lived-in finish.

For Doja Cat, Casillas took the look to the next level by starting off with a sharp, intense brow. He used Shisheido's Brow Ink Trio Pencil, Powder, Brush in Deep Brown to fan out the hairs and give the musician's eyebrows a punk-like finish.

Next, he grabbed the brand's Kajal Ink Artist Shadow, Liner, Brow in Nippon Noir and applied it across the entire lid as a base for the smoky, black shadow. He then used a brush and drew the makeup up towards the temples. The artist finished off the look with a few layers of the Controlled Chaos MascaraInk in Black Pulse to give the star intense black lashes to match.

Hairstylist Jared Henderson partnered with Joico to give Doja Cat the perfect mullet to round out the entire look.

While Casillas is obviously a makeup pro, he shared via Instagram that even if you're just a beginner, there's no pressure to give this look a perfect finish. In fact, he actually says it should have a live-in vibe. "It's ok to be messy," he wrote, "the look calls for a grungy eye."

VIDEO: These Mascaras Will Make Everyone Think You Got Lash Extensions

Makeup artist Aaron de Mey went for a multi-dimensional, intense eyeliner look for Givenchy's Fall 2021 show, while Chanel decided on a kohl liner finish for theirs.

De Mey gave models larger-than-life eyes to match the grungy-punk look of the runway. He used a smoky brown eyeshadow on the lids and created a long, thick, black cat eye on the top of the eye. Then, he mimicked the technique with white liner for the lower lash line. Afterwards, the artist placed fluttery eyelashes on both the top and bottom lids to finish off the bold eye makeup.

At the Chanel Fall-Winter 2021/22 Ready-to-Wear show, the intense eyeliner put the model's eyes at center stage.

Makeup artists started off by using the Les 4 Ombres Multi-Effect Quadra Eyeshadow in 334 Modern Glamour as a base, then used Le Crayon Khôl in 61 to bring the smoky effect around the entire eye. Next, a few coats of Le Volume Revolution de Chanel mascara in 10 Noir was applied to make the lashes just as intense.

A Pop of (Punk) Color

If you thought punk makeup only involved using black products, let none other than Dame Pat McGrath prove you wrong.

For the first look, McGrath used the Xtreme Burgundy shade from the Pat McGrath Labs Mothership VIII Eyeshadow Palette as a base for the lids, followed by Rose Seduction, applied using a wet brush for greater color intensity. Next, she grabbed the Celestial Divinity Luxe Quad in Fleur Fantasia and used the Iridescent Orchid shade to blend. The Permagel Ultra Glide Eye Pencil and Dark Star Mascara were used on both look one and two as the finishing touches.

For the second look, McGrath swapped out the pink eyeshadow for the Blitz Blue shade from the Mothership I: Subliminal Palette as well as the PermaGel Eyeliner Pencil, also in Blitz Blue, to created the winged eye.

"The makeup inspiration for Versace FW2021 was to create something disruptive that captured a new world featuring vibrant colors and individuality," McGrath said of the looks. "Deep vibrant pigments of bright magenta and electric blue were precisely applied to the eyes in bold graphic lines — inspired by the collection's richness of fabrics and colors, symbolizing confidence, strength, beauty and personal identity." 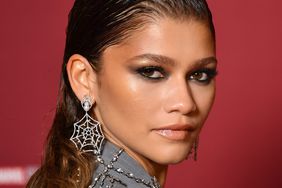