"So often as women, and especially as Black women, so many things land on us… but there’s nothing magical about being the one that carries all of the weight."

HBO's adaptation of Watchmen may have premiered last year, but it's quickly risen to the top of many watch lists over the past few months. The show shines a light on the 1921 Tulsa Race Massacre, one of the worst acts of racial violence in American history, and stars Regina King as a police officer turned superhero who fights against white supremacy and police brutality — two themes that, sadly, feel particularly relevant right now. King's performance was nothing short of brilliant and so, to fans of the show, it's no surprise that she received an Emmy nomination for the role, or that Watchmen is the most nominated show this year.

Off the screen, King is fighting those same issues, using her platform to speak out against the murder of George Floyd and advocate for the arrest of Breonna Taylor's killers. The actress has also shared crucial information and resources to prevent voter suppression on Instagram and endorsed progressive BIPOC candidates on Twitter. With her new partnership with Vaseline, she's also shining a light on systemic racism in healthcare that's caused Black people to be disproportionately affected by the pandemic. And that's on top of being a leading voice on the troubling lack of diversity and opportunity in her own industry — King called out the Emmys for overlooking actors of color in an op-ed back in 2010, five years before #OscarsSoWhite.

Ahead, we talk to the actress and activist about leveling the playing field for Black actors, giving herself permission to cry and 'be wounded' as a Black woman, and the self-care practices she's been turning to during the pandemic.

InStyle: For the first time in the's 71-year history, Black actresses dominate the category for lead actress in a limited series or movie — what significance does this moment have to you, especially considering you spoke out against the whiteness of the Emmy's a decade ago?

Regina King: I hope that it makes the conversation less about the light being shined on Black actors that haven't been recognized for extraordinary work for so long, and places the conversation on the merit of our performances. I hope that it will allow people who have performances that are equally as powerful have the same opportunity to be seen. When a project is nominated that brings more eyes to the project, and it brings more opportunities to the people involved, so I see it as evening the playing field.

InStyle: Your partnership with Vaseline is about bringing awareness to systemic disparities that Black and Latinx communities face in the healthcare system — why do you feel passionate about championing this?

RK: I'm passionate about this cause because it affects me directly, it affects all of us. The way the system has been developed over the years, our essential workers and our frontline workers are usually Black and Brown people, and they're the ones that are being hit the hardest.

The current social unrest has exposed how Black and Brown people continue to be disproportionately [targeted], in addition to battling a health pandemic. The epicenter of both of these crises are the same, they are a result of the system that has been put into place in our country. All of the things that we have come to know, have become accustomed to, or have ignored depending on who you are talking to — we're now reaching a place where we can't breathe anymore. So, being able to shed light on this big problem and the work Vaseline is doing with the non-profit Direct Relief is really important to me. (As part of this work, Vaseline has donated $1M to support Direct Relief and their COVID-19 Fund for Community Health, which helps get these communities the testing and care they need, in addition to providing PPE to frontline health workers and products for medical staff and patients.)

InStyle: We know that as women, our health concerns are often not taken as seriously as men's — for example, physical pain is more likely to be written off as being psychologically or emotionally driven — and even more so for Black women. Have you ever experienced this personally?

RK: I feel like that's the case for myself all the time, and it's the case for most women that I know. This is something that transcends race, and where sisterhood comes into play. We've had to lean on each other to be advocates for each other and lift each other up. For example, something I personally didn't realize is that so many women experience miscarriages. When you have one you feel so alone — like you're on an island and no one else has shared that experience. I had felt like there was something wrong with me because, historically, miscarriages have been treated like something is "wrong with you." Yet it's something that is more common than one thinks and it took leaning on friends, on my mother, and expressing that pain to find out that my mother had had a miscarriage before, my friend had had a miscarriage before — and that both of them had not spoken about it. We find ourselves constantly in a place where we have to lean on each other for that encouragement to get help, that permission to feel that it's ok to need help. So often as women, and especially as Black women, so many things land on us.

You hear the term Black Girl Magic, and there's nothing magical about being the one that carries all of the weight. That is something that we historically have had to do and we don't necessarily have someone that takes care of us, so we lean on each other and find moments of discovery where we give ourselves permission to acknowledge that we're wounded. Even when we don't realize we're doing it, we're subconsciously always pulling from somewhere for something that gets us though — and it's not magic, a lot of times it is each other.

InStyle: Can you share your quarantine wellness routine? What have been some of the most important rituals for you in maintaining physical and mental health during such a stressful time?

RK: I've been allowing myself the space to actually emote, to cry. A lot of us are experiencing depression right now, and a lot of us who may have not been able to identify depression, and when we're feeling it are experiencing it for the first time. I've been very much okay with those moments where I feel like I'm suffocating and taking the time to actually release it out into the world. It doesn't feel like I'm helpless, it feels like a cleansing and I've been allowing myself to shed the tears.

As women so often, we don't want to cry on somebody's shoulder. Especially when you have young children you want their minds to feel safe since tears can sometimes translate to children feeling like they need to take care of us and mothers don't ever want their children to feel that way. It's hard to give yourselves the space to cry, but I think it's been good for my son to see it. I'm lucky that my son is an adult and doesn't internalize it in any way. He'll go, "What? Ok, you're just letting it out, alright." And then I'll laugh, or sometimes I'll sound like a sailor with all the emotion. But the point is that I'm still allowing myself the space to emote and not worry about what someone else will think.

InStyle: Is there a stress-relieving, self-care routine you've been turning to in this time?

RK: We recently got a puppy, and that has definitely been a new ball of energy in the house. The walks have doubled. Our eldest dog, Cornbread, will be fifteen and he's walking slow, but our new dog, Earl, is only three months old so he's all over the place. Sometimes Cornbread will have to sit out the second walk of the day, so Earl can take his second walk.

During this pandemic, I've also discovered that I'm quite the bath person. I have been that person on Amazon, ordering different types of bath salts and it's become a ritual. Before I would say I would take a bath every couple of months, but now it's more like two or three times a week. 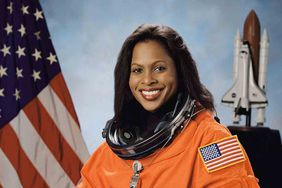