Julia Malacoff is a freelance editor and writer based in London specializing in health, fitness, and nutrition. Julia previously worked as an editor in magazine publishing for seven years. She's contributed to Shape, InStyle, Insider, Cosmopolitan, Fast Company, Popsugar, Healthline, and more. She has her personal training certification (Level 4 EREPS) and the Precision Nutrition Level 1 Certification.

As January rolls around, we set resolutions. Often, these goals revolve around getting fit or overhauling our diet. (Research published in 2016 shows 55% of resolutions are health-related). But by the time February hits, studies show most of us have abandoned the changes we were so excited about just a few weeks before. All that's left is a sense of failure as we go back to our old ways — and a chance to repeat it all again next year.

So how can we put a stop to this endless cycle?

Why do we love New Year’s resolutions so much?

"As a species, humans are in love with this idea of rebirth, getting a fresh start, or having a new beginning," points out Krista Scott-Dixon, Ph.D., director of curriculum at Precision Nutrition, a nutrition coaching and certification company whose methods are based on behavioral psychology.

Think about it: Many cultures have a mythology of death and destruction leading to rebirth. And most cultures also have a ritual or holiday to mark the new year or seasons changing (i.e. the Western New Year, the Chinese New Year, the Jewish New Year). They may be at different times of the year, but they all carry an opportunity for a fresh start. So it makes sense that innately, we feel inspired by getting a chance to wipe the slate clean and start being the best version of ourselves, Scott-Dixon says.

As for why we so often turn to health and fitness resolutions, Scott-Dixon notes that especially for those in North America, it's cultural. "We love the concept of an overnight success. For instance, some kid who starts a company in their garage and then they're a billionaire." Of course, that's not how it really works, but that's how we understand it.

"Humans are blessed with a big consciousness and a big imagination," Scott-Dixon adds. "One of the more exciting types of things to imagine is transformation." So why can't we have a Cinderella story, or magical transformation, of our own? Ultimately, when we set a resolution, that's what we are hoping for.

Why your brain hates your New Year’s resolution.

So if we love a fresh start so much, why do we fail at our resolutions so often?

Well, we tend to let our imaginations take things a little too far. "For most people, resolutions represent the fantasy of perfection — perfect body, perfect life, perfect feelings — without any of the reality," explains Sasha Heinz, Ph.D., a psychologist who focuses on goal setting, behavioral change, and habit formation.

"For most people, resolutions represent the fantasy of perfection — perfect body, perfect life, perfect feelings — without any of the reality."

Maybe we imagine ourselves 20 pounds lighter (or fill in any other arbitrary number here). But what we imagine isn't just our changed body. Instead, we picture our lives as fundamentally different — all because we weigh less. In our mind's eye, we not only have the body we always dreamed of, but also the confidence, ideal partner, and amazing wardrobe we've been longing for, too. But as anyone who has lost weight will tell you, it doesn't miraculously fix all your problems. (Translation: Losing weight may be a fill-in for another resolution you may need to prioritize instead, say, building your self-esteem.)

Plus, the actual weight loss part is hard work. "All humans are motivated to avoid pain, seek pleasure, and exert the least amount of energy possible," Heinz explains. Unfortunately, going after any big New Year's resolution is going to require doing the exact opposite: avoid pleasure, seek pain, and exert a whole lot of energy, she says.

Another problem is that we tend to overshoot with our New Year's resolutions, particularly when it comes to health and fitness. We go after a 30-day detox that cuts out all the foods we love, start an intense exercise regime there's no possible way we can keep up with, or vow to cut out carbs for an entire year.

"When we attempt giant, sweeping changes, especially without adequete support in place, we are effectively self-traumatizing."

These "complete overhaul" resolutions appeal to our desire to have our very own magical transformations. But our brains don't like this approach. At all. "If we look at cognitive neuroscience, giant, sweeping, sudden changes that overwhelm our ability to cope with them are known as trauma," Scott-Dixon says. "So when we attempt giant, sweeping changes, especially without adequate support in place, we are effectively self-traumatizing."

Your brain's inevitable solution, of course, is to go back to the way things were — ASAP.

On the other hand, your brain loves habits.

Humans are by and large creatures of habit, according to Luke Ayers, Ph.D., a behavioral neuroscientist and assistant psychology professor at Widener University, whose research focuses on fear, anxiety, stress, hunger, and habit-like behavior.

Though we like to believe we are quite flexible, we all rely on routine, especially when it comes to health and fitness, Ayers says. "Many of the greatest success stories, whether they're from professional athletes or individuals improving their health, often describe really well-established routines of eating, physical activity, and sleep."

We go through our daily routines based on cues like hunger, tiredness, our environment, and importantly, our habits. "These cues can drive our behavior, and they create an expectation for what should be next," Ayers explains. "When that expectation is violated, we get frustrated and experience the strong desire to remedy the situation, to reestablish the routine." This may be another reason why broad changes can be so much more likely to fail.

For example, many people wake up and drink coffee before heading to work. If you've established this as a routine, it's so deeply entrenched that you can do it on autopilot, even if you're still half asleep.

Now, imagine you discover in your half-asleep state that you're out of coffee. "If that ever has happened to you, you might recall how upsetting it is," Ayers says. You may be frustrated, angry, or feel like your whole day has been "thrown off." Suppose this frustrating cycle happens over and over again throughout the course of the day. That's what happens when you completely change the way you eat and exercise all at once.

Simply put, it's just too stressful for your brain. "Throwing any single part of a routine off can be aversive, so a large change might be more so," Ayers says. "You are constantly tempted to fall back into your old habits, so it takes a lot of self-control. Self-control is impaired by stress, so it compounds the problem."

You might be able to push through it for awhile, but eventually, it becomes too much (for most people). And just like that, your New Year's resolution is toast.

A better model for change:

While disruption to our routine can make us incredibly frustrated, habit and routine are actually some of the most powerful tools we have in pursuing a health or fitness goal.

Get serious about planning.

Lastly, you commit to specific actions that build the practices. To get into the practice of running regularly, your first action might be to run five miles three times a week. You plan out how, when, and where you're going to get it done, and then you go for it. In scientific research, this planning stage is known as "implementation intention."

Over the years, research has shown time and again that this planning stage — deciding when, where, and how you're going to get something done — is key.

Once you've conquered the first action, you pick another one. Over time, you get closer and closer to that big end goal. (If you're familiar with the work of Atomic Habits author James Clear, you probably already know that research shows we're better at changing our routines one habit at a time.)

And while your overall goal might inspire you, it's important to focus on the day-to-day actions. "Only action creates change," Scott-Dixon says. "I can think and plan and dream and make a vision board, but unless I change something, unless I do something in the world, nothing's going to be different. It is in the doing that we change our brains and get the motivation to keep going."

Consider what could go wrong.

In order to achieve your goals, you may have to do something that doesn't seem all that appealing. "We have to first think optimistically, then think pessimistically," Heinz says. She's referring to the science-backed technique of "mental contrasting," which basically means thinking through what could possibly go wrong along the way to reaching your goal. Then, you come up with ways to deal with those obstacles.

Gabriele Oettingen, Ph.D., has spent her career researching how our thinking impacts our ability to achieve our goals. In one of her most important studies, she observed women in a weight loss program for a full year. The women were divided into two groups, one that focused on their fantasy weight loss outcome, and another that focused on the positive outcome as well as the problems they might face in the process of getting there. The women who only focused on the outcome ended up losing, on average, 24 pounds less than the group that did mental contrasting.

"One reason our brain likes this approach is that it becomes a reward," Scott-Dixon says. In other words, your brain sees positive change almost like a game. For example, let's say you're trying to eat less refined sugar. (Which is a great place to start, by the way.) When you're confronted with the opportunity to eat something sugary but you choose not to, you can celebrate that. Really let yourself feel how good it feels to make that choice. Because that teaches your brain that making a wise choice leads to feeling good, Scott-Dixon says. "The more we can seek feeling good over feeling bad, the more we're going to win this game." 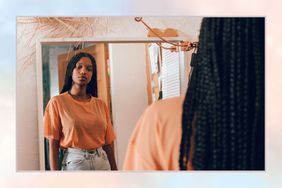 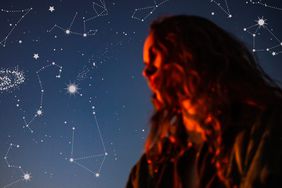