Kate Hudson Doesn't Do Resolutions or Dry January — and Doesn't Think You Need to, Either

"For me, it's about everything in moderation. I'm not an extremist," the WW ambassador says of her approach to the new year.

Kylie has worked in digital media for the past nine years. She joined InStyle in 2019 as the Senior Lifestyle Editor and oversees the site's wellness coverage, including health, fitness, astrology, and sex and relationships. Kylie was previously a digital editor at Shape for nearly six years, where she wrote and edited content across the site (and tested every workout under the sun). Kylie graduated with a B.A. in journalism from Northwestern University's Medill School of Journalism and a minor in French. She was born in Paris and lives in Brooklyn, NY.

Although the weight-loss program formerly known as Weight Watchers is one of the most well-known commercial diets, interestingly, Hudson says she doesn’t believe in diets — or in cutting anything just because it’s January.

In fact, while everyone else is swearing off carbs or doing Dry January, Hudson is out here launching her own vodka line.

“I like cocktails. For me, it's about everything in moderation and that's just how I've always been in my life. I'm not an extremist. It’s about being mindful of all the things that you're putting in your body and how you approach them," she tells InStyle.

"There are certain times in life where you just kind of just go for it and eat the things that you want to eat, and then you wake up in the morning and you get back to being mindful,” she adds.

Her approach to fitness is equally, well, sane: “When you have three kids and work all day, it's hard to maintain a real routine,” Hudson admits. “But I definitely get it in, in some capacity. I'll do 10 minutes on the treadmill or I'll get on the Peloton bike if I have a second, whatever I can. I have the MIRROR and really like that and, my favorite thing, if I can have the time to do it, is hot yoga. Hot yoga makes me feel good.”

As for her take on resolutions? “I am not a big resolution person. I think sometimes people get a little carried away with resolutions and put, like, 10 things on their list.”

Her advice instead: “I think goal-setting can be really great. It can be helpful to really hone in on one thing.” It doesn’t need to be diet- or exercise-related, either — "It can be travel, it could be wearing a new color, or getting more in touch with your adventurous side,” she says.

The one goal on Hudson's mind this year? Returning to her creative roots as an actress. “For me, 2020 is going to be very creative making movies, so it'll be a nice shift. I've been doing a lot of business lately, so it'll be a more creative year.” 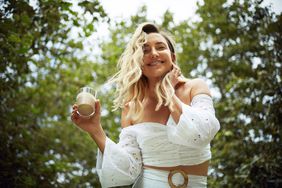