Concierge IV services are sweeping the self-care industry, from curing a hangover to boosting beauty. Here’s what to know before you try one.

A registered nurse named Lucy Bamberger is inserting a needle into my arm. I can't watch. "Just a quick pinch," says Bamberger, CEO of Rejuvio, a concierge nursing service that provides IV vitamin drips to run-down New Yorkers. She visits patients in their homes, wheeling in an enormous blue suitcase stuffed with medical supplies.

My nerves are soon calmed by Bamberger's cheerful, capable demeanor as she bustles around my hotel room. After checking my vitals, she attaches a one-liter bag of saline and electrolytes to an IV pole and runs it through the IV line. A few minutes later, she adds an Elite blend: vitamin C, zinc, B vitamins, amino acids, and glutathione, a potent skin-clearing antioxidant that fights free radicals and inflammation.

I suddenly taste vitamins. "Perfectly normal," she says. Sessions usually last 45 to 90 minutes, so I stretch out on my hotel bed; Bamberger tucks a blanket around me, and the vitamins flow in.

IV drip therapy, first devised as the "Myers Cocktail" in the 1960s by a Baltimore doctor named John Myers to boost energy, is having a resurgence. Mobile IV lounges have popped up at film sets and music festivals like Coachella, and athletes utilize the service after competing. Famous enthusiasts include Rihanna, Kendall Jenner, and Adele, who reportedly relied on vitamin drips to get her through a grueling eight-night run at L.A.'s Staples Center.

It's a booming wellness trend that shows no sign of slowing down — particularly as COVID has made people more attuned to their health than ever before.

Why not just pop a supplement? Dr. Frank Lipman, chief medical officer of The Well, a holistic health and wellness club, says an IV can bypass the sometimes sluggish gastrointestinal system to get nutrients directly into the bloodstream. A drip typically costs several hundred dollars and can ease dehydration from long flights, a nasty flu, or a brutal hangover.

But Dr. Sam Torbati, co-chair of emergency medicine at Cedars-Sinai Medical Center, counters that most of a drip's relief comes from the fluid itself. "Most Americans don't drink enough water and other fluids, and drips can make them feel better with more energy," he says. "For people who are more severely dehydrated, such as those with a hangover, the effect can be even more pronounced."

These 4 Esthetician-Approved Products Have Majorly Helped My Dry, Aging Skin

Be sure to approach hooking up with caution, says Dr. Torbati. Before any treatment, a complete medical history should always be taken, as Bamberger did with me (then, per state law, she sent the results to a doctor to be screened and authorized as telemedicine, which typically takes 5 to 10 minutes and should be done in advance of the IV). To be truly safe, Dr. Torbati adds, get the all-clear from your general practitioner first. People with conditions such as congestive heart failure or those on dialysis, he says, can have serious reactions from a high volume of fluids.

Using a qualified doctor or nurse to administer the jab is also a must, says Dr. Zhaoping Li, professor of medicine and chief of the Division of Clinical Nutrition at UCLA. "Improperly inserted needles can cause major complications," she says, among them air embolisms, thrombosis, sepsis, and blood infections such as bacteremia. Patients, meanwhile, should know what's going into their bodies. Dr. Li says that when you put something straight into your veins, you bypass the body's built-in safeguards to regulate nutrient levels — and more isn't always better. "Repeated doses of vitamin C, for example, may harden your kidneys by overburdening them," she says.

How to Tell if You Have Dry Skin, Or If You're Actually Dehydrated

When choosing a clinic, be wary of dubious promises, such as a drip that can burn fat or remove heavy metals. ("Not effective," says Dr. Torbati.) And don't fall for slippery language — a "professional hydration therapy provider" may not be a doctor or nurse, and if they can't tell you what's in the treatment, head for the exit.

Bamberger emphasizes that IV therapy shouldn't replace a healthy diet, "but it's a great supplemental treatment," she says. Most patients see her every two weeks and typically feel a boost for about three days.

Forty-five minutes after my session, the bag is empty. "How are you feeling?" Bamberger inquires while she tapes up my arm. As if she needed to ask. I spring out of bed in one motion, newly energized. 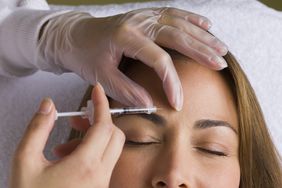