Everything you need to know about the ancient technique that releases calming chemicals in the brain.

I never considered myself a particularly anxious person. Until a few years ago, I would have considered myself an optimist, a go with the flow kind of gal. Then I got a high pressure job in the fast-paced entertainment industry, quit to go freelance, and just a couple of months later, Covid hit.

Ever since then, I've been struggling with episodes of fear and anxiety so paralyzing that having to make a small decision or perform a minor task sometimes sends my thoughts spiraling into chaos. With stress breeding more anxiety, and the news being what it is these days, I know I'm not alone.

As most of us are doing, I've been looking for ways to manage and alleviate my tension. In addition to a year of traditional therapy, I've tried many more "alternative" methods such as meditation, reflexology, and sound baths — but EFT (Emotional Freedom Technique) was completely new to me. I stumbled upon it while listening to a podcast episode, heard terms like neuroplasticity and neural pathways, and was immediately intrigued. And then I got really, really into it.

What Is EFT and How Does It Work?

Traditional Chinese medicine identifies energy meridians (channels) running through our body, and specific points along these abstract lines that we can target to address energy blocks and imbalances. While acupuncture, a more widely known Chinese medicine tool that goes back thousands of years, uses needles to stimulate these points, EFT asks us to swap needles for our own fingertips and gently tap on them to achieve similar results.

While there are 361 acupressure points in the body, EFT mainly engages the head and torso: the side of a hand; the top of the head; the eyebrow point; the side of the eye; under the eye; under the nose; on the chin; under the collar bone; the side of the hand; and under the arm. Chinese medical theory believes the meridians are connected to our internal organs, including our brain. So by hitting these spots rapidly and repeatedly, we allow the life energy that is believed to run through the body to flow with ease, and help clear any blockages.

How Does Acupuncture Actually Work?

Tiffany Jeffers, a certified EFT Practitioner, says this technique "triggers the central nervous system to release calming chemicals and create new neural pathways in (our) brain." If this sounds complicated, the reality of it is quite simple: "Modern neuroscientists have discovered that thought alters DNA," she continues, and that "the brain is neuroplastic, meaning, it can change." So by focusing on any specific problem or negative emotion we might be feeling, and tapping along the acupressure (or meridian) points at the same time, we could ostensibly retrain our thoughts and direct them toward more positive beliefs.

A few key phrases are often associated with EFT, and spoken out loud throughout the tapping practice. A standard sentence might be, "although I (am feeling this emotion / am struggling with this issue) I deeply and completely accept myself."

I decided to start slow and see what it could do for me in its simplified at-home version. Over the course of a month, I've been tapping every day for five or ten minutes at a time, which helps quiet my frenzied thoughts almost instantly. I tap through all the acupressure points mentioned above while repeating soothing statements like, "even though I feel anxious right now, I completely accept myself," or "even though my mind feels so chaotic right now, I know I'm safe and I love myself."

What Are the Benefits of EFT?

According to its practitioners, EFT can be used as a stress relief strategy and can help with anything from increasing energy and motivation levels, overcoming subconscious blocks, managing pain or food cravings, releasing negative beliefs or disturbing memories, improving personal relationships and confidence levels, and much more. "People simply get unstuck," Jeffers describes, and "results are so profound."

I've only been tapping for a few weeks, and both my mood and anxiety levels have greatly improved. Jeffers tells me I'm not alone in improving so quickly, as the majority of her clients see "noticeable results after the first session."

"It's a potent neuroscientific tool, and it clearly does work and affect the brain. It's simple, but also hugely powerful, and it's a great way of reducing anxiety."

Floss Knight, a London-based psychotherapist with twenty years of experience and CEO of UK Therapy Guide, is also enthusiastic about EFT and the impact it's had on her patients. "It's a potent neuroscientific tool, and it clearly does work," she says. "It affects the brain. It's simple, but also hugely powerful, and it's a great way of reducing anxiety." As with many stress relief techniques, "anything that stops you and slows you down," Knight continues, "is a way of self-soothing. If you're practicing it on yourself, you're administering pacification." Which is great news for anyone whose mind has been feeling as loud and chaotic as mine!

EFT is known to be effective even in some more extreme cases. A Journal of Nervous and Mental Diseases study "examined its effect on posttraumatic stress disorder (PTSD) and psychological distress symptoms in veterans receiving mental health services," and found extraordinary results: After six weeks of tapping sessions, "90% of the EFT group no longer met PTSD clinical criteria", compared to a mere 4% in the standard care control group.

A Word of Caution

While you can definitely do EFT on your own as I have been, tapping can bring up difficult emotions, which is why it's best to so in a safe setting with a practitioner present. For example, tapping through a painful dynamic could cause us to uncover the root of our problem or relive traumatic memories, and it's never advised to do so without the help and presence of a trained professional. (After trying it on my own, I'm definitely interested in going deeper and intensifying my practice with the help of an EFT practitioner.)

Knight is also emphatic about the need for "significant regulation" of what she describes as an "incredibly powerful tool." Serious mental health conditions like complex trauma and PTSD should be treated by licensed professionals, and that's why it's vital to vet EFT practitioners just like anyone else we'd entrust with our health. "Vulnerable people need to be safeguarded, and working with someone who is untrained can be a huge risk," she says.

If you're curious, tapping (with a professional) is something to consider alongside more traditional psychotherapy, and Knight has used both in her practice. She says she's all for "giving people more resources to free themselves and understand themselves better," and for something like fear and anxiety EFT is a fantastic tool.

With collective stress levels as high as they have been in recent years, it can be quite seductive to think of any one practice as a "quick fix," and that in itself is a risk. But with proper coaching and the right person guiding us through it, there is no reason not to try making whatever adjustments we can to the way we think and feel. Is it a placebo effect? Is it science, or magic? Who knows! But I know I won't stop tapping along anytime soon. 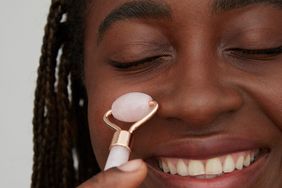 Here's How You Should Use a Face Roller