The Brazilian musician spoke to InStyle about her Rio roots, Mariah Carey, and embracing her sexuality.

Anitta looks like she's using an Instagram beauty filter when she enters our Zoom call. When I point this out to her, it's intended as a compliment, but the Rio-born singer and entrepreneur is quick to tell me she's not wearing a drop of foundation. Instead, Brazil's biggest export since the thong bikini dons nothing more than eyeshadow, lashes, lip gloss, and one crucial product I can't see on camera — her first-ever fragrance with Sol de Janeiro, the reason for our interview today.

"I was using Sol de Janeiro before because some friends from Miami introduced me. They were like, 'I love this cream, the Bum Bum Cream,'" she tells InStyle. Between constant flights and studio time with the likes of Madonna and Cardi B, Anitta's schedule hardly contains a free moment. Yet she still made time to pour her heart into the partnership. "I love getting involved in everything I do," she says. "In the beginning, it was a little hard because I'm obsessed with smells. I was naming so many scents that I like, everyone was like, 'You need to make some sense' [laughs]. I was like, 'OK. Coffee! Passionfruit!' The team was like, 'Wait!'"

Together, they settled on a body mist that blends passionfruit and coconut water with notes of tiger orchid, patchouli, and vanilla bean. Anitta calls it the "perfect formula," and it's contained in an adorable yellow bottle she helped design.

If you've watched her Netflix docuseries, you know Anitta's devotion to family sets her apart from other stars of her caliber. The 28-year-old always includes loved ones in her creative process, and this fragrance was no exception. "Sol de Janeiro was sending everything to my house, but sometimes I was traveling for work and my mom was the one receiving everything because she lives with me. So she was opening everything before me," she explains, laughing. When she received the last round of fragrance samples, she enlisted her mom, aunts, and longtime best friends to help her select the final product.

Dakota Johnson Just Did the Impossible: Created a Two-in-One Bath Product That Works

"I think most of the friends we meet after getting famous and popular, everyone is kind of afraid of telling the truth, losing you and the good things you bring to them," she says. "But my family, they don't care at all. They don't give a shit if I get pissed. They're just honest."

In the end, the involvement of family in the scent felt natural, given that it's meant to encapsulate Anitta's Brazilian roots. "I feel like the Bum Bum Cream and my fragrance — even the name, Sol de Janeiro — bring a lot of Brazil to everyone," she says. "If you go to Brazil, you're going to see we're about self-love. We don't care what people think about us; we're thinking about how we feel about ourselves. I love the idea of bringing that to the whole world, you know?"

Self-acceptance has always been at the center of Anitta's career. Her openness about her sexuality (she came out as bisexual in 2013) is part of what keeps her millions of followers coming back. "When I decided to be open about it to my audience, I was just too happy with myself to be worried about what people were going to think and say," she recalls. "Who likes it, likes it — and who doesn't, they can step back. Even if we're not including the word [sexuality] in this pitch, I think freedom is about that, and I feel like the fragrance is about freedom."

I happen to know Anitta is a diehard Mariah Carey fan. When I ask whether the queen of Christmas inspired the mist, she bursts into a grin. "Mariah's an inspiration for me in life," she explains. "I was telling her this — it's crazy, now I can tell her this — when we were talking recently. Her energy and the way she lives, the way she is, is so much more than just her looks. I feel like when you feel amazing about yourself, you just look even more beautiful every day."

If you buy Anitta's Sol de Janeiro body mist, she wants you to wear it on a night out — as long as you do so safely. "Everyone needs to cooperate and be vaccinated to help everything come back," she says. As for how she wants it to make you feel? "All my friends say I'm refreshing. I didn't know what that word meant," she laughs. "I came to the U.S. in January and some people I met, they called me that word five times. And then I realized what it was, and I was like, 'Wow, I love being refreshing.' That's how I want people to feel." 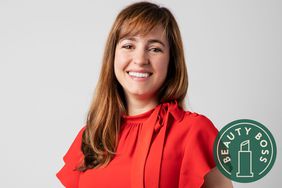