So it didn't take long to see the news on Sunday night's red carpet at the SAG Awards was going to be all about color, but who would have guessed the big winner would be hot pink? Or that Nicole Kidman, nominated for a movie called Lion, would show up wearing twinned beaded parrots? Or that there would be so many fashion moments that would make your jaws literally drop, and not necessarily in a good way?

Among the first stars out of the gate were Sophia Bush in bubble-gum Marchesa and Anna Chlumsky in magenta Elizabeth Kennedy – I'm pretty sure there were more flares of Barbie-meets-Marilyn dresses during a strange showing of brilliantly, sometimes garishly, bright dresses. It goes to show that in times of crisis and uncertainty, fashion tends to go in some unpredictable directions. That is to say, I'm right there with you wondering what was going through the minds of Kidman in her green Gucci gown, Thandie Newton in that odd vision of a demented amusement park from Schiaparelli, or Taraji P. Henson in a pretty perverted (though how can you not love it?) see-through dress from Reem Acra.

Well, it's fair to say that this will not be a SAG Awards that will go down in history for its tastefulness, but still, it did have some fashion highlights. And the more I look at some of the most daring OMG dresses, the more I'm impressed by the willingness to go there. Are you? OK, OK, I'm not going to sugarcoat this – it's all borderline crazy – but here, I'm going to pick just a few of my favorites anyway:

This is an unexpectedly revealing dress, but the combination of lily pads and lingerie somehow works in favor of provocation.

The embroidery imparts a quasi-Indian effect, and the fit is as precise as a tattoo.

It takes a lot of courage and stamina to wear a jumpsuit to an awards ceremony, and more so when you add glitter. As Christie, who appears in Westwood's spring advertising campaign, said of her consultation with the designer: "I said SAG Awards, and she said sequin jumpsuit."

You have to be impressed by her commitment to making a fashion statement with substance by wearing pants throughout the awards season, but she also makes it look so good that it's also just downright fun.

Twelve years old, and so much talent, it's no wonder that designers are knocking down her door. She has already landed a Calvin Klein campaign, and now this ruby red dress has eclipsed the competition, yet Brown shrugs it off like an old pro: "Giorgio Armani sketched it for me," she said on the red carpet. "And I'm like, that's totally fine." 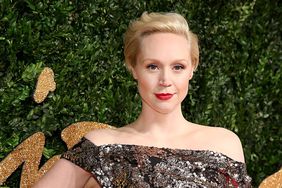 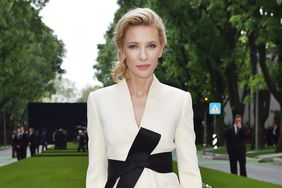 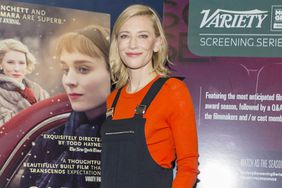 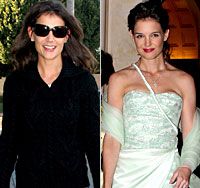