Looking like she was straight off a runway, Jennifer Lopez stormed the red carpet at the Conde Nast Fashion Rocks show at Radio City Music Hall in New York City. Lopez-looking fierce in a Studio 54-inspired dress by Roberto Cavalli-joined style-setting stars like Jessica Alba, Nicole Richie and Fergie for the annual celebration of rock and style.

See the stars at London Fashion Week on InStyleMagazine.co.UK.

Surprise guest Nicole Richie glowed in Roberto Cavalli as the photographers went crazy at the Conde Nast Fashion Rocks show at Radio City Music Hall in New York City. Other celebrities who caused a stir on the red carpet were Tyra Banks in Prada, Ashanti in Reem Acra and LeAnn Rimes in Alexander McQueen.

She teamed up with 50 Cent to introduce Jennifer Lopez, but Teri Hatcher made a grand entrance with designers Mark Badgley and James Mischka. "It was amazing!" Hatcher-who is the new face of the luxury clothing label-said of the Badgley Mischka Spring 2008 fashion show held earlier in the day at the Bryant Park tents.

Among the fashion forward musical pairings on stage were Fergie and rock legends Aerosmith. Swapping the glamorous Chanel frock she wore on the red carpet for sequined hot pants, Fergie made beautiful music with animal print-clad front man Steven Tyler.

"I'm wearing Francisco Costa for Calvin Klein!" Alicia Keys announced to reporters as she was whisked into Radio City Music Hall. Keys teamed up with Costa to present one of the evening's performers and later joined forces with Carlos Santana to make some beautiful music of her own.

After wondering aloud to the audience why he was chosen to host the annual rockfest-which airs tonight at 9 on CBS- Jeremy Piven presented a tongue in cheek retrospective of his past fashion faux pas. Fortunately, Fergie was willing to overlook the Entourage star's past style sins.

Among the stars who brought along their favorite designers as their dates for the evening was Ashlee Simpson, who showed Max Azria some love on stage. Simpson sat front and center at the BCBG show and is expected to return to the tents for the presentation of the spring Max Azria collection.

and performer Jennifer Hudson traded style secrets backstage. While Barton looked the part of a rock muse in a metallic gown by Versace, she confessed that she feels most comfortable in jeans and flats.

posed with Avril Lavigne-who accessorized her Max Azria frock with black nails with skull designs-before taking the stage with Maroon 5 for a performance that included several strutting models. Levine provided a long list of his own fashion inspirations, including music legends from Bob Dylan to Elvis.

After teaming up on stage, Mary J. Blige and newlywed Usher celebrated high atop the city at the Rainbow Room. Jeremy Piven, Ludacris, Josh Groban and Nicole Richie also made the trip up to clink glasses at the post-show party.

Removing a black trench to reveal a racy black babydoll dress, Jennifer Lopez lit up the stage when she performed her hit song, "Waiting for Tonight." Among the crowd who rocked out to Lopez and the other performers during the one-night-only show were Sophia Bush, Mya, Denis Leary and LL Cool J.

KEEP CLICKING TO SEE WHICH STYLISH STARS HIT THE SHOWS AND THE PARTIES ON DAY 1 of NEW YORK FASHION WEEK. 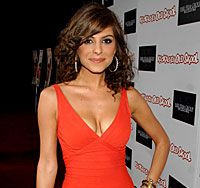