Jet-setting couple Marc Anthony and Jennifer Lopez (both in Dolce & Gabbana) rode in style to the 50th-birthday celebration of Domenico Dolce. Their horse-drawn carriage pulled up to the Hotel Principe's Club Prive where the A-list crowd was later serenaded by Diana Ross.

took a sultry stance at the Dolce & Gabbana fashion show in a lingerie-inspired dress from the designers. The stylish mother of twins recently completed her first triathlon.

Ever-daring Rihanna commanded the front row at the Spring 2009 Gucci show. The Barbadian singer donned a minidress from the line along with daring fringed boots from the Fall 2008 collection.

Superstar Cate Blanchett showed off her svelte shape in Armani Prive at the Giorgio Armani show in Milan. The mom of the three wasn't solo in the front row-Blanchett was joined by her husband, playwright Andrew Upton (not pictured), and one of her young sons.

New parents Matthew McConaughey and Camila Alves traveled to Milan for the Dolce & Gabbana fashion show. The Texan actor is the face of the label's The One fragrance.

slipped into a little something sheer by D&G for the label's show. The "I Kissed a Girl" singer paired her daring floral blouse with a ladylike knee-length skirt. 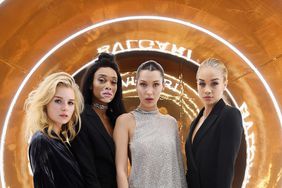