Fall 2013 Couture Fashion Week: Everything You Need to Know

Couture Fashion Week is wrapping up in the City of Lights, and we have all of the insider scoop that you need to know straight from the Paris runways. Click to see all the need-to-know moments, from Armani Privé's wedding-worthy gowns to celebrity party appearances by Bradley Cooper and Carla Bruni and more.

Bulgari unveiled its Diva Collection of jewelry with a cocktail party in Paris, attended by Bradley Cooper and Carla Bruni. The line is a tribute to the iconic celebrities of the '50s and '60s who reigned in the Dolce Vita era.

The actress made quite the entrance in a sheer lace jumpsuit as she arrived at the Zuhair Murad couture show, held at the Hotel de Montmorency.

InStyle Style Director Melissa Rubini snapped a photo of this strapless multi-hued floral gown, one of the pieces part of Net-A-Porter's "Art Capsul" collection. The exclusive line for the e-retailer debuted in Paris during Couture Fashion Week, and is filled with pieces created by prominent artists.

Any single design from Giorgio Armani's stunning couture collection would be a dream to wear as a bride, but the ethereal quality of these three elegant nude gowns stood out among them all.

The inspiration behind Jean Paul Gaultier's fierce fall 2013 collection was big jungle cats: leopards, to be precise. The spotted print could be seen throughout the show on a variety of different designs, including big furry coats, silk shirts, and tights.

Valentino's crowning beauty achievement was a simple braided updo.Work the runway style now by braiding a section of hair behind your ear, sweep it over the top, and fasten behind your other ear. If your hair is too slippery, a spritz of texturizer or dry shampoo will give your strands more grip.

The beauty line celebrated Alber Elbaz's limited-edition makeup collection, Lancôme Show, in a big way. VIPs from the fashion and beauty industry, including actress Zhang Ziyi, designer Giambattista Valli, and more, gathered at the Trianon Theatre in Paris where they enjoyed performances by cabaret dancers and a concert by Sharleen Spiteri and Texas.

Our Picks for Rihanna and Beyoncé's Next Alexandre Vauthier Look

Rihanna and Beyoncé are known fans of designer Alexandre Vauthier, whose sexy designs they've both donned before. His couture show, filled with slinky dresses with thigh-high slits and deep Vs, was filled with options for the pop culture risk-takers.

Now this is a supermodel! The 43-year-old Campbell kicked off Paris Haute Couture Fashion Week when she opened the Atelier Versace show in a velvet jacket held together by crystal hooks.

After the Versace couture show, designer Donatella Versace caught up with Uma Thurman and her fashion show surprise, Naomi Campbell.

InStyle's Style Director, Melissa Rubini, offered a glimpse inside the Versace showroom in Paris with this sketch-to-runway look.

With their shades firmly in place, the ever-stylish Olivia Palermo and Jennifer Lawrence kept it cool dressed in head-to-toe Dior for the the Christian Dior fall 2013 couture show. Lawrence, who is the current face of Miss Dior, arrived at the Hotel Des Invalides in a daring stomach-baring ensemble, while Palermo opted for a more demure, feminine look.

Giambattista Valli amplified the popular silhouette by making it the focal point of many of his designs. The result: utterly feminine creations adorned with feminine and floral flourishes.

Only Rihanna could pull off a cardigan as a dress to wear to a fashion show! As fashion's favorite bad girl, that's what the singer wore to greet Chanel's creative director Karl Lagerfeld at the Grand Palais in Paris for the fall 2013 couture show.

The actresses posed together upon entering Chanel's fall 2013 couture show, held at the Grand Palais in Paris.

The Final Bow at Chanel

"Cannes" It Be Ulyana Sergeenko?

The Russian designer was a favorite among stars at this year's Cannes Film Festival. These two dresses from her fall 2013 couture show could be contender's for next year's festivities. 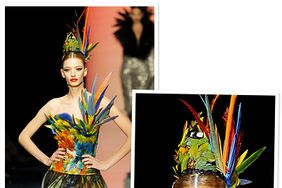 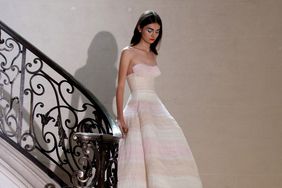 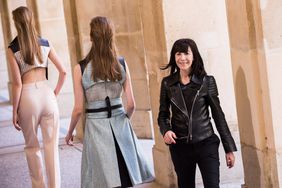