-with reporting by Lauren Tumas

(second from left) and Isabel Lucas (second from right) joined Moore and Holmes in the front row at Calvin Klein.

joined Courtney Love, Stephanie Pratt and the rest of the downtown crowd to close New York Fashion Week with a toast to Andy Warhol during the Dom Perignon bash at Villa Pacri. The champagne brand has released a set of limited-edition bottles that pay tribute to the iconic artist.

All in the family: Dylan Lauren, Andrew Lauren, Ricky Lauren and David Lauren all attended the Ralph Lauren Spring 2011 show.

star Kristin Cavallari joined Sex and The City costume designer Patricia Field at The Blonds Spring 2011 show. The label is known for their edgy, fashion-forward designs. 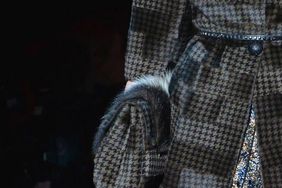 Accessory of the Day: #NYFW Day 8