Wunderkind designer Joseph Altuzarra drew front-row beauties like Rachel McAdams and Leighton Meester to what was only his second show. Consummate fashionista Becki Newton also dropped by to support the young talent.

-with reporting by Lauren Tumas and Nakisha Williams

The scene at the Band of Outsiders Spring 2010 presentation was a soggy one as guests were forced to line up in the rain for entry to Milk Studios. Inside, they were greeted by nautical looks from designer Scott Sternberg inspired by a late-'70s Malibu beach girl. "I'm a huge fan of all his stuff," said Kirsten Dunst (in Band of Outsiders). "I loved all the looks today and I want them all! I love his flavor. He just has great tailoring."

Last minute mayhem hit backstage at the Promenade before Vivienne Tam's runway show. "The day was crazy! The shoes just arrived yesterday. Some of the samples didn't arrive because of customs problems. A model didn't show up. We almost had to cut two looks," said designer Tam, who took the shoes off of her feet to give to a model to walk. The snafus weren't apparent from the front of the house. Jessica Stroup, Emmanuelle Chriqui and Estelle (not pictured) sat side by side in the front row to view flowing pastel pieces inspired by the classic Chinese love story concerto "Butterfly Lovers."

's Ashley Greene was dressed to kill (or, at least, bite) at the Alice + Olivia presentation in Chelsea. The big-screen vampire was treated to a performance by French girl group, The Plastiscines, whose attitude, designer Stacey Bendet said, embodied the collection: "They're this mix of cool punkish Paris, but yet also have this beautiful softness to them."

Far afield from zip code 90210, California girls Kristin Cavallari and AnnaLynne McCord readied their shopping lists at the Alice + Olivia presentation. "I'm obsessed with tights and leggings right now," said McCord, citing her favorites from the collection. And Cavallari? "Literally, everything out here I would wear. "

Party in The Tent! QVC hosted a late-night bash in the Bryant Park show space with guests including Gossip Girl beauties Hilary Duff, Kelly Rutherford and Jessica Szohr, along with other small-screen stars like Rachel Zoe, Ana Ortiz and Mark-Paul Gosselaar.

costars Nico Tortorella and Mischa Barton met up with Hayden Christensen backstage at the Lacoste show in Bryant Park. The tall trio took a collection of country club-ready tennis-inspired designs.

It was all smiles in the front row of the Christian Siriano show! Kristen Johnston, Kelly Rowland, Mena Suvari and Katrina Bowden (all in dresses from the line) turned up to support the Project Runway winner's soft and sophisticated draped designs. "I think he's so brilliant because he has mature, really extravagant couture stuff," said designer pal Johnston, "You can go from ball gowns to really wearable stuff." 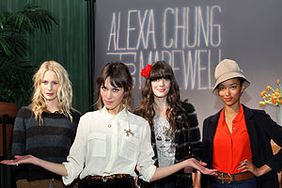