Mara was dressed in all-black at the Calvin Klein after-party, opting for sexy midi-dress by the designer and ankle-strap peep-toe booties.

Kidman dressed to nines for the Calvin Klein spring 2014 after-party, wearing a classic black ensemble by the designer. She accessorized with a gold bracelet and ankle-strap sandals.

During Fashion Week, Victoria Beckham strolled in N.Y.C. in a beige and white dress dress, cropped cardigan and oversize shades.

Pare tried her hand at the crop top trend with a Jason Wu ensemble: A black-and-nude sleeveless button-down and a matching high-waisted pencil skirt. She accessorized with angular earrings, midi rings, a black clutch and black cut-out heels.

Madekwe shouldered a blush blazer over a body-hugging dusty rose knee-length dress. Her cobalt blue pumps added a pop of color to her look. 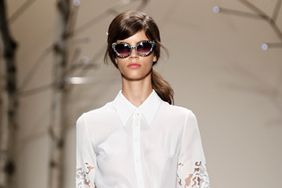