After narrowly avoiding a near wardrobe disaster when Joel Madden stepped on the train of her Marchesa gown, Nicole Richie pulled it together to pose with her fiance and Gwen Stefani at the Montblanc cocktail party to benefit UNICEF, hosted by the Weinstein Company. Kate Bosworth, Malin Akerman and Russell Brand were among the other celebrities who spent the night before the Oscars at Soho House L.A. to support Montblanc's Signature for Good initiative, a collection of writing instruments, jewelry and accessories that will be sold to raise funds for education and literacy programs around the globe.

A little rain couldn't dampen the spirits of the guests at Chanel's pre-Oscar bash, held at L.A.'s legendary Madeo restaurant. "I just arrived from Berlin where I'm shooting a movie, so this is my first Oscar week party," said Inglorious Basterds star Diane Kruger, who spent the evening sipping wine and smooching boyfriend Joshua Jackson. "It's a pretty fabulous way to get things going!"

The day after her big win at the Film independent Spirit Awards, Precious star Mo'Nique kept the celebration going when she attended a luncheon thrown in her honor at Philippe Chow. Among the well wishers who came to fete the Best Supporting Actress contender was talk show queen Oprah Winfrey, who was nominated for the same award in 1985.

and Demi Moore arrived in style at the 3rd annual Hollywood Domino gala, pulling up to The Beverly Hilton Hotel in a $480,000 Maybach. Once inside the hotel's Bar 210, the couple got in on the fun at the spirited tropical themed game night, which benefitted Artists for Peace and Justice.

and Nia Long cheered on Zoe Saldana (in Valentino) when she accepted the award at the Essence Black Women in Hollywood luncheon, held at the Beverly Hills Hotel. "So much goes on that sometimes you don't allow yourself a moment to sit back and take everything in," said the star of maintaining her perspective during a year that's included roles in the blockbusters Avatar and Star Trek. "While everybody's talking and everybody's celebrating I just take a moment to myself to let everything sink in. I want to look back and think, 'Those were the times of my life,' I want to be in the moment."

party hopped around Tinseltown, stopping by The Hollywood Reporter's Oscar nominee dinner to hang with L.A. mayor Antonio Villaraigosa before continuing on to the Hollywood Domino gala.

and Joel Madden joined fellow eco-friendly celebs Jessica Alba and Cash Warren at Global Green USA's 7th annual pre-Oscar bash, held at L.A. night spot Avalon. Though the brothers Madden took the stage to entertain the crowd, Joel-who will spin tunes at the Academy Awards ceremony-kept things low-key. "Getting ready for my DJ gig on Sunday night," he tweeted. "But it's been a good day."

At the Five Nights Before Oscars event, held poolside at the Beverly Wilshire Hotel, guests like Anna Kendrick, Jordanna Brewster and Jane Fonda prepared for the final countdown to Sunday's main event with the help of mini-massages, Kate Sommerville DermalQuench treatments and Christopher Drummond Beauty makeovers while helping to raise funds for the Red Cross Haiti Relief Fund. "I wasn't feeling that well yesterday, but there is no way I am going to get sick for this weekend," declared Kendrick (in Kouis Vuitton). "I have just been trying to take it easy and wear things that are comfortable."

(in Brioni) and Diane Lane showed their continued support for the victims of the earthquake in Haiti when they attended an Artists for Peace and Justice benefit at Bar Nineteen 12 in Beverly Hills.

Film, fashion and fast cars were on the agenda when Camilla Belle teamed up with Marchesa and Audi to host a pre-Academy Awards party at Cecconi's Restaurant. After arriving in Audi TDI clean diesel SUVs, guests like Wilmer Valderrama, Nikki Reed and Alexa Vega headed inside to view a stylish installation of Marchesa red carpet gowns and swap Oscar predictions.

(in a House of Lavande necklace) spent her birthday helping to raise awareness about the growing hunger crisis at a benefit for the FEED Foundation and the Hungry In America Project, held at Craft Los Angeles.

(in Stella McCartney) and Chris Kattan helped hand out the awards at the Swarovski-sponsored Costume Designers Guild Awards, held at the Beverly Hilton hotel. The night's big winners were the costumers behind the wonderful wardrobes of Mad Men, The Young Victoria and Glee. 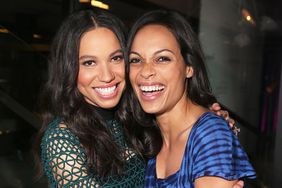