What a way to start the show.

If you were watching the 94th Annual Academy Awards — which, of course you were because Beyoncé was performing — then you would have had the extreme good fortune of witnessing Queen Bey herself in an extravagant opening of the show. She sang her hit single "Be Alive" from the soundtrack of King Richard (which was nominated for the awards of Best Picture, Best Actor, Best Actress, and Original Screenplay).

Though it's been a while, we've all been waiting with bated breath (and anticipation every time #Beyonce is trending on Twitter) for newness from Beyoncé. After all, we haven't had a true album from Queen Bey since 2016 — The Lion King: The Gift, Black Is King, and Homecoming: The Live Album notwithstanding. Today, the most Grammy Award-nominated artist in history (with 79 noms and 28 wins) can add another title to her wildly impressive and ever-expanding resume: Oscar-Nominated artist Beyoncé Giselle Knowles—and here's to hoping she'll add Oscar-nominated actress someday to her list of accolades.

While most performers would have chosen to serenade the A-list actors (and some TikTok stars) on stage at the Dolby Theatre in Hollywood, Beyoncé chose a more meaningful, intentional locale. Orchestrating a pre-recorded production at a tennis court in the neighborhood of Compton, California, the performance truly gave King Richard its due. No, this wasn't just any practice court; it was the tennis court referenced in the film and an important backdrop for its fierce heroines. Tennis champions Venus and Serena came into their own there as young up-and-coming athletes and would go on to win a combined 30 Singles Grand Slams (Serena 23, Venus 7), 14 Doubles Grand Slams, and 12 Wimbledon titles, among countless other awards.

As far as visual homages go, the show opened with Beyonce center stage on the tennis court, dressed in yards of flowing fabric in the unmistakable hue of "optic yellow" and white stripes you'd find on tennis balls and courts all around the country (and the world). In her usual formation (surrounded by elaborate dancers pulsating along in rhythmic symmetry), Beyoncé belted out powerful vocals, singing the lyrics "It's so good to be alive." Astonishingly, even the harpsichord and violins wore the tennis-ball yellow hue. Now that's dedication!

If you thought the tennis court was just a place for backhands, breakpoints, and backspins, well, you may have also missed Beyoncé's nod to the Compton Cowboys, a group founded in the early 1980s by real-estate agent Mayisha Akbar. Comprised of Black friends from the neighborhood of Compton, California, the group used equestrian culture and horseback riding to provide positive influences and combat any negative stereotypes about Black people in their neighborhood. Bey's poised dancers rode in on horseback with two racquets in an homage to the group. With Beyonce's Houston roots, the legacy of Black Cowboys rides again.

Another moment you may have missed if you were mesmerized by impeccable vocals or intricate choreography: The elaborate hairstyles all of the dancers, and some musicians, wore throughout the performance (bonus points if you spotted Blue Ivy in the front looking as cute as ever, ready to take the reins from her famous mother). The hairstyling was a direct reference to those worn by Venus and Serena in the early '90s when they were competing as young girls. These protective, creative, and complex braids, whether they were fashioned into crowns or adorned with heavy beads, were something of a signature style for the sisters worn throughout their teens — a style they were heavily, and unfairly, scrutinized for at the beginning of their careers. Now, thankfully, the iconic hairstyle is getting its overdue celebration. Serena has even passed the pride of braids down to daughter Alexis Olympia, who is often seen sporting similar looks on Instagram.

Along with performing her own music, Beyoncé also sampled the '90s West Coast anthem of the late, great Tupac Shakur, "California Love." She followed the reference with a smooth transition into another musical icon from the West Coast, "Nothing But A G Thang" by Snoop Dogg, nodding to two songs that almost never left the charts during the film's era. The '90s soundtrack harkened back to King Richard, the Williams sisters' training soundtrack, and their road to becoming championship tennis players, but it also amplified pride in their culture, in their city, and pride of being young, talented, confident Black girls in the '90s.

Beyonce is known for her easter eggs in her music and imagery, but don't worry if you missed them; you can go back and watch it again! 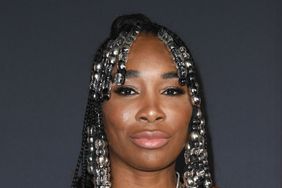 Regina King, Long May She Reign
It's Been 10 Years Since Rebecca Black Released "Friday," and the Internet's No Kinder to Young Girls