It was a nod to Venus and Serena Williams.

For the first time in two years, the Beyhive got a performance from their queen. In a move that injected a much-needed dose of energy to the 2022 Oscars, Beyoncé opened the ceremony with a performance of her nominated song, "Be Alive," which appeared in the film King Richard. Appropriately enough, Venus and Serena Williams introduced Beyoncé, along with an entire troupe of dancers, all completely decked out in tennis-ball yellow outfits — even the cellos and violins were painted in a matching retina-searing yellow.

Beyoncé's gown, designed by David Koma, featured an off-the-shoulder silhouette and was embellished with feathers and finished with gloves, which also featured on the Oscars red carpet this year. She accessorized with a diamond garter belt and a huge sparkling ring over her glove. As a nod to the Williams sisters, the performance took place in Compton, California, where they grew up under the tutelage of their father, the subject of the movie.

King Richard is also nominated for Best Picture and Will Smith is up for Best Actor for his role in the film. Today's performance wasn't Beyoncé's first performance at the Academy Awards. Back in 2005, she sang "Learn to Be Lonely" from The Phantom of the Opera. Then, in 2007, Beyoncé took the stage alongside Jennifer Hudson and Anika Noni Rose with a medley from "Dreamgirls." Hugh Jackman joined her in 2009 for a medley of selections from movie musicals. Today marks her first-ever nomination, however, though she has had songs qualify for the Best Song category, including "Guns Go Bang" from The Harder They Fall, which she performed with Jay Z, and "Spirit" from The Lion King. 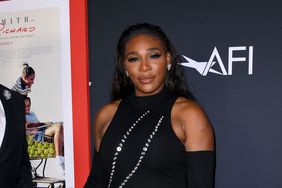