The West Side Story star is up for Best Supporting Actress.

West Side Story's breakout star Ariana DeBose seems to be one of awards season's biggest names. With a SAG Award and a Golden Globe Award already under her belt, she's the favorite to take home tonight's Oscar for Best Supporting Actress. Fans know that before she stepped into Anita shoes, she was part of the original Broadway cast of Hamilton, so there could be a day where she earns a coveted EGOT — and tonight's ceremony could be the first step towards that.

DeBose matched the carpet and stunned in a solid red Valentino Haute Couture pantsuit. The actress's plunging sweetheart crop top was paired with matching red trousers and a dramatic, floor-sweeping shawl. She accessorized with a stunning diamond necklace, a pair of blingy bracelets, and a statement diamond ring — all from De Beers. DeBose kept her glam relatively simple with a brown smoky eye and pink lip and her signature pixie cut put a pair of diamond earrings on full display. She also wore an OMEGA Constellation watch with a diamond-pavé bezel and blue dial made of aventurine.

DeBose spoke to Vanity Fair about her very specific portrayal of Anita, saying that she had a singular vision for the character and that director Steven Spielberg was on board.

"I said this very early on — even in my audition process — I wanted to portray her as an Afro-Latina. Period. Point blank. End of story," she said. "If you weren't interested in exploring that, you shouldn't hire me. I'm a Black woman, and in the context of this film that's going to mean things. People should react to her slightly differently."

That confidence has served her well, especially with all the hardware she's earned for the role. And though it's clear that she's found her place in the spotlight, it wasn't always the case. In an interview with Harper's Bazaar UK, she said that if she hadn't caught the acting bug, she would have been a politician. 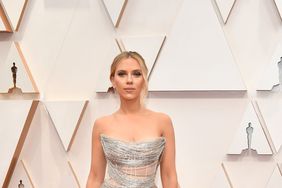 Scarlett Johansson Wore $2.1 Million Diamond Earrings to the Oscars — and They're Worth a Zoom