The Most Iconic Red Carpet PDA Moments from the MTV VMAs

Red carpets are often the place we go for the latest trends in fashion and beauty, served up to us by all our favorite celebrities posing in front of a swarm of clicking cameras. But the most recent trend seen on the carpet isn't exactly what you would expect. Forget Versaces's latest drop, retina-searing neon power suits, or raw meat dresses (looking at you, Gaga). Celebrity-couple PDA is taking over award shows and events — from Machine Gun Kelly and Megan Fox's sensual embraces to the swapping of saliva between their good friends Kourtney Kardashian and Travis Barker.

But red carpet PDA has been around long before last year's awards season. Touching tongues in front of flashbulbs has been a thing on the red carpet since the advent of the original pop-punk era, circa 2003. So, along with the resurgence of spiky hair, punk anthems, Hot Topic fashion, and skinny, tattooed internet boyfriends, even more public displays of affection are making their way into the zeitgeist (thanks to the presence of social media this time around).

One of the most PDA-filled carpets belongs to that of the MTV Video Music Awards. Perhaps it's the campy fashion or all the hot musicians, but horniness is in the air, and one quick sweep of Google will show that there's photographic evidence to prove it. So, in honor of the 2022 VMAs this Sunday, we're taking a look back at all the best red carpet PDA moments through the years.

This couple takes the cake — and why wouldn't they, considering Barker has been around since the first pop-punk emergence? Whether they're on the red carpet, filming for The Kardashians, or on the road for Barker's tour, these two can't seem to keep their hands off each other. Last year at the VMAs, they gave unsuspecting (or maybe suspecting) cameras quite the show when they began French kissing on the carpet.

Coming in second is this hot-and-heavy couple, who is also known for its constant shows of affection (they even drank each other's blood). At last year's show, Fox wore a super-sexy naked dress alongside MGK, who wore a completely sequined crimson suit. The fiancés posed for photos while sharing passionate glances and hand holds.

The king and queen of the early aughts lived up to their reputations at the 2021 VMAs. As if Lavigne's plaid, cut-out suit didn't scream punk, then making out with her green-haired beau certainly did.

The husband-and-wife duo were just settling into newlywed bliss at last year's awards. The 21 Pilots member planted the sweetest smooch on Ryan's cheek.

The Miz and Maryse Ouellet

At the 2018 VMAs, the two professional wrestlers faced off in the ring, aka shared a steamy kiss, for their fans. As per usual, The Miz worked the cameras while Ouellet laughed at her husband.

Katarina Deme and The Kid LAROI

After a big year of massive hits, the Kid LAROI made his debut at the 2021 VMAs with his girlfriend, TikTok star Katarina Deme, by his side. The Gen Z power couple wore coordinating black 'fits and shared a sweet kiss.

The VMAs air on Sunday, August 28, at 8/7c on The CW Network in addition to BET, BET Her, CMT, Comedy Central, Logo, MTV2, Nickelodeon, Paramount Network, Pop, TVLand and VH1. 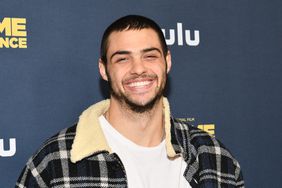 Noah Centineo Is Now Bald and Has a Skull Tattoo 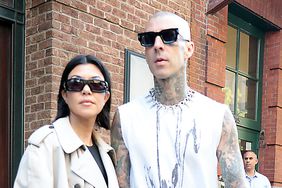