Considering this year's Met Gala fell immediately after New York Fashion Week, we wouldn't be surprised if industry pros and celebrities had little energy to spare. But speaking with Mj Rodriguez prior to the event's red carpet, you can hear excitement in her voice. This is arguably one of fashion's biggest nights, and the actress is more than ready to step out in a stunning, statuesque Thom Browne design, which will no doubt make jaws drop.

"I feel like we've been in COVID for so long and we haven't had an opportunity to really get out and interact, or walk a red carpet, or go to the Met Gala," she tells InStyle in the middle of getting ready for the event, noting that the whole glam process is one of her favorite parts. "I feel like the year has just boomed completely, and we finally have gotten back to ourselves, you know what I mean?"

We do. In a way, the Met Gala, which has the theme of American Independence this year, marks a return to glamour — and Thom Browne's button-down, draped, pleated design, complete with a balloon-sleeved top, has us falling in love with fashion all over again.

"I call it this beautiful oil spill, slash edgy Victorian look," says Rodriguez. "I felt like it was just so edgy, but still reminiscent of what forward American fashion looks like. It doesn't hold to a specific narrative of how Americans or fashion in general are supposed to be — it can be anything you want it to be because America's literally a melting [pot]. But it's also giving an homage to the classic, beautiful looks that were done in the '60s, and so forth."

And, if you're looking at this elaborate design wondering how Rodriguez is walking? Well, let's just say practice makes perfect, and that the star knows that this night is all about the performance.

"You have to give what you give. That's the main thing when it comes to the Met Gala — you have to really own the piece that you're in, because the piece speaks for itself."

That's partly why Rodriguez wanted to top things off with sky-high platforms, too.

"I [wanted to feel like] I was like dripping, but also rising outside of the oil spill," she says. "They're really high so that it can give you this kind of elevation. I wanted people to see that I felt like I'm a statue."

Of course, this Met Gala is more than just fashion in many ways. Aside from bringing a smile the faces of those seeing the looks, there's also meaning behind each and every design.

"Now is the time to give people, obviously, homage and bits of nostalgia, happiness and joy, but also something that's a conscious thought towards what American style looks like and what the person inside of the fashion can bring to it as well," says Rodriguez. "It gives me a true understanding of what various culture identities look like, and if that's the biggest part about coming to the Met Gala and really owning up to the thing that we got. I know Thom Browne is going to execute that."

While this is only Rodriguez's second Met Gala, it's likely she'll be a mainstay on that carpet in the future — especially when you consider her busy schedule, which includes a variety of project.

"I have the Emmy's coming up that I'm really excited about, and then I have more music that I'm working on," she says. "I've been trying to really just stay diligent and make sure that I give my fans what they want, and just be respectful of what I love and what my first passion was. Then while I'm doing that, I'm also going to be doing a show starting literally the day after the Emmys. It's a busy, busy September, but I am so happy about it, though." 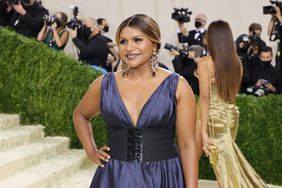