"When we get to do our job together, essentially, and it requires us hanging out together all night and getting dressed up in the most beautiful clothes, they're the coolest date nights ever."

The fabulous fashion may steal the spotlight at the Met Gala, but between oohing and aahing at all the elaborate gowns, suits, and million-dollar jewels, we're distracted by the cute couples out on the red carpet. For 2022, Jodie Tuner-Smith and Joshua Jackson were among that group, and before they stepped out in their Gilded Glamour Gucci looks, they spoke to InStyle about why they were thrilled to attend together.

Gilded Glamour or Not, Sheer Dresses Were Still a Major Trend at the 2022 Met Gala

"One of the joys of going with my joyful wife is that she leans into the possibility of having a good time at this thing," Jackson told us over the phone before the event. "I'm very excited to go and have a good time with her. And we've only just now — I mean, literally just now, in the last weeks — started interacting with people who are not our blood relatives. So, to have an opportunity to go and step out of this place that we've all collectively been in and be in a room full of peers, but also look like a million bucks and spend an amazing night with my wife, that's great. I think we're all ready for some version of that."

Of course, their outfits were part of that excitement, too. While Jackson arrived looking sharp in a grey-and-black tux paired with a white bow-tie, Turner-Smith wowed in a sparkling, leggy, fringed ensemble that included a long train.

"It's cool, it's sexy and glamorous, and I love it," she said when describing her look. "I love it for my first-ever experience doing this. I think I win if I can come out of the gate swinging here in this look, if I do say so myself."

Before heading out for the night, the two snapped a few photos with their Motorola Razr phones. Recently, the couple partnered with the brand on its #HangUpOnIt campaign — which, Jackson says, relates to fashion events like this.

"If the hangup campaign is about anything, it's about expressing your own individuality," he told us. "Stepping out of the world that we've been in for the last couple of years, together, and trying to find your sense of self in all of this craziness. I think that's what this big costume ball is. It's a way for you to go and have a sort of expression of self, and a celebration of design and beauty after a time of intense anxiety."

Jackson is also a big fan of the Razr because, unlike most phones, you can actually shut it when you're done scrolling and disconnect or "hang up" for a bit.

"This idea of hanging up, actually putting down the phone, having it live in your pocket for a while, rather than strapped to the front of your face, as we've all been doom scrolling for a couple of years — that's where Jodie and I try to live. In a very present way with each other, with our baby, and our lives. [The partnership] made sense for this moment, where we're all stepping out and trying to celebrate life."

Despite the couple's love of occasionally putting down their phones, Turner-Smith admits the two don't mind their romantic red carpet moments going viral, like at the 2022 Critics Choice Awards.

"No, I think it's really funny when things like that happen, because after that happened, my assistant was talking to his girlfriend and he was like, 'They're like that all the time,'" she said. "There's always going to be that element of people wondering, 'Are you guys performing for the cameras or what?' And for us, we always kind of say it, but I really love hanging out with him. And so when we get to do that, when we get to do our job together, essentially, and it requires us hanging out together all night and getting dressed up in the most beautiful clothes, they're the coolest date nights ever. You know what I mean?"

The two definitely brought that same energy to the 2022 Met Gala.

"That's what makes this whole thing a dream," Turner-Smith continued. "It sounds so cliché, but people are like, 'What's the point if you don't have anyone to share it with?' And it's like, I have the most amazing person to share it with and I just have the best time because of that. All of these special things just mean that much more." 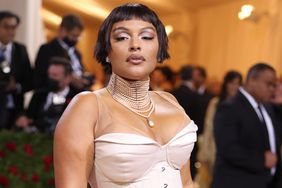