From "Gilded Glamour" to short shorts.

Hailey Bieber traded in her Met Gala glitz and glam for a bra and short shorts combo. Following the prestigious event at the Metropolitan Museum of Art in New York City, Bieber swapped out her sophisticated ivory silk number for a rebellion-meets-business look.

The model attended an after party at Zero Bond in Manhattan wearing a black blazer over a sheer bejeweled bralette and black leather hot pants, which she paired with red strappy heels and thin black sunglasses. Although the tone of her outfits changed quite a bit, the model stayed with the same designer wearing Saint Laurent by Anthony Vaccarello both on and off the carpet.

She kept her hair pulled into the tight bun that she sported while on the carpet, although she metaphorically let her hair down alongside her BFF Kendall Jenner for the party portion. At one point, the two sprawled out on a couch together to rest from the evening's festivities, all captured in a TikTok video. For her part, Jenner wore a see-through black lace two piece by Miu Miu over a rose gold lingerie set.

During the benefit, Bieber wore a stunning Saint Laurent gown that paid homage to a vintage YSL piece worn originally by Jerry Hall. The clingy, satin dress included a high-leg slit that allowed her stocking-clad legs to peek out. She paired the look with black heeled sandals. This year's theme was "In America: An Anthology of Fashion" a continuation of last year's "In America: a Lexicon of Fashion." With a focus on "Gilded Glamour" the stars showed up in opulent and grandiose pieces that channeled the country's Gilded Age, which roughly took place around 1870-1900. 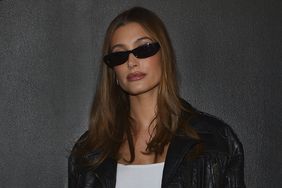