11 Shows to Stream Before the Golden Globes

The Golden Globe Awards air on Sunday and, like the master procrastinator you are, you've barely seen any of the nominated TV shows. Now what?

First, don't panic. (We get it: It's easy to get a little too caught up in bingeing those Real Housewives re-runs.) But the good new is, you still have time to squeeze in some essential viewing, and between stealthy lunchtime streaming and dedicated after-work cramming, we're confident you can still get up to speed.

To help you on your journey, we've put together this handy guide of 11 shows you should prioritize, as well as where to stream all the other nominated shows and performances ahead of the big show on Sunday. Happy bingeing!

Why You Need to Watch: This intimate look at the early life of Queen Elizabeth II is unlike anything we've seen before, and in a category stacked with the most buzzy shows in recent memory, that it-factor is crucial. Not only is the cast superb (Claire Foy nails her portrayal of the young queen), but each episode pulls you in so close that you feel like you're actually part of the royal family.

Why You Need to Watch: When this FX series debuted in the fall, it was an instant hit. The brainchild of Donald Glover (also known by his rap persona, Childish Gambino) follows three young black men just trying to figure it all out in Atlanta, Georgia. The show is incredibly smart. It tackles poignant, fairly heavy subject matter, but still manages to keep the audience laughing out loud at the same time.

Editor Pick: The Night Of

Why You Need to Watch: Serial season one lovers: This one's for you.This HBO miniseries encompasses everything that got us hooked on the insanely popular podcast in the first place. It's a classic whodunit with lots of mind-bending twists and turns that will keep you on the edge of your seat from start to finish.

Why You Need to Watch: For the second season in a row, Rami Malek has brought it (and kind of creeped us out at times) as hacker Elliot Alderson. His performance as the squirrely vigilante continues to be the most compelling part of the buzzy USA show.

Why You Need to Watch: First things first: If you haven't watched Stranger Things, you haven't lived. It ushers 1980s nostalgia into the modern day, and Winona Ryder serves as yet another delightful blast from the past.

Why You Need to Watch: Maura Pfefferman is, without a doubt, one of the most important characters on TV today. As Transparent goes on, it becomes more and more clear that there isn't an actor on the planet who could play the character as well as the amazing Jeffrey Tambor. He takes us on a journey that isn't always glamorous or even nice, but it's as honest as it gets.

Why You Need to Watch: It's been awhile since we've seen a female character on TV quite as relatable as Issa Dee (played by the hilarious Issa Rae). She is seriously all of us! The good, the bad, the ugly, and everything in between.

Why You Need to Watch: All the performances in this limited series are absolutely phenomenal, but the portrayal of the emotional rollercoaster of attorney Chris Darden (played by Brown) just about tops them all. Darden wasn't typically a name you heard as much in the countless retellings of the famous O.J. Simpson saga, but Brown has now changed that for good.

Editor Pick: Mandy Moore, This Is Us

Why You Need to Watch: If faint memories of Moore in A Walk to Remember make up the bulk of your impression of this former pop songstress as an actor, then just wait until you get a load of her on this show. Her trials and tribulations as a mother of three will make you feel all the feels.

Where to Stream: NBC.comThe Other Nominees:Chrissy Metz, This Is Us (NBC.com)Olivia Colman, The Night Manager (Amazon)Lena Headey, Game of Thrones (HBO Go)Thandie Newton, Westworld (HBO Go)

Why You Need to Watch: Much has been said about Hiddleston over the last year (especially as it relates to his brief fling with Taylor Swift), but it's his performance on this hit AMC show that we should all be gabbing about. He hits every mark as the mysterious Jonathan Pine and, hey, he's not too bad to look at, either!

Why You Need to Watch: Kerry Washington slays her performance as Anita Hill, the woman who spoke up about having been sexually harassed by then-Supreme Court Judge nominee, Clarence Thomas. It's a powerful reminder to all women to speak out against injustice and demand respect, regardless of the consequences. 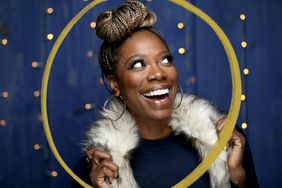