The Golden Globes (or any awards show, really) can be counted on to deliver a parade of show-stopping, jaw-dropping gowns. And while we always love classic elegance, there's something refreshing about seeing a star eschew that kind of sartorial safety in favor for something a smidge more daring. That's why we dug through the Golden Globes archives and rounded up A-list risk-takers who deserve some recognition.

Last year, Alison Brie traded in a glamorous gown for a killer Vassilis Zoulias jumpsuit that came with a dramatic full skirt. In 2016, Brie Larson stepped out of her comfort zone by piling on the shine in a mega-watt glitter number by Calvin Klein collection. Even as far back as 2003, Sarah Jessica Parker caused mayhem when she went for a Jørgen Simonsen corset and Dior Homme pants by Hedi Slimane.

We can't wait to see what kind of bold looks the 2019 Golden Globes nominees will be bringing this Sunday (8 p.m. EST, Jan. 6 on NBC). But in the meantime, scroll through to see the stars who have upped the risk factor over the years.

Anne Hathaway proved that mixed patterns are a polarizing pick with this Elie Saab dress, which featured multiple leopard prints. She paired the gown with with Lorraine Schwartz jewels, a Jimmy Choo bag, and Olgana Paris shoes.

With a turtleneck, keyhole, cutouts, and a sheer skirt, this Givenchy Haute Couture gown really did have it all — and Rosamund Pike topped the look off with a metallic silver blazer perched on her shoulders.

Alison Brie made a statement-making turn on the politically-charged red carpet in a black strapless skirted jumpsuit by Vassilis Zoulias paired with Bulgari jewels and Christian Louboutin heels.

Connie Britton wore her feelings on her sleeve (er, sweater, you know what we mean) at the 2018 Golden Globes in a black "Poverty is sexist" Lingua Franca sweater, Max Mara ball gown skirt, black Jimmy Choo sandals, and a Tyler Ellis clutch.

Sophie Turner's black-and-white Louis Vuitton gown was certainly not for the faint of heart – featuring structured shoulder pads, sexy cutouts, and sheer panels, but she pulled it off flawlessly.

Nicole Kidman is hardly one to play it safe at award shows and the 2017 Golden Globes were no different. She ruled the red carpet in a silver embellished Alexander McQueen gown featuring poufy sheer sleeves and a ruffled train.

Larson stepped out of her comfort zone and kicked off her awards season streak with this gold Calvin Klein Collection creation that featured all-over embellishment, ribcage cut-outs, and a plunging neckline.

Hudson had everyone fooled—her mermaid-like three-piece Michael Kors Collection design (that comprised a shimmery peach choker, bandeau, and skirt) was actually all connected in the back.

Lawrence in Dior—not really all that risky. But Lawrence in this Dior, pretty risky. She made a statement on the red carpet in a siren-red number with a crop overlay and side ab-baring cut-outs, complete with a 156.77-carat diamond Chopard bib necklace.

Fonda took a risk, and it paid off (she landed on Eric Wilson's 10 best-dressed list) with her ruffled caped Saint Laurent Couture by Hedi Slimane creation.

She made a dramatic entrance at the 2015 Golden Globes in a caped Zuhair Murad design that she styled with Stuart Weitzman shoes and Lorraine Schwartz jewels.

Stone eschewed dresses in favor for a crystal-embellished Lanvin jumpsuit with a black ground-grazing sash. The finishing touches? Ofira jewels and black pumps.

The blonde bombshell wowed on the red carpet in an Atelier Versace design that not only boasted a navel-plunging neckline, but scandalous cut-outs on each side.

Roberts gave her Dolce & Gabbana dress an unexpected menswear spin with a crisp button-down layered underneath.

The Smash actress went for a high-fashion look in a plunging black Theyskens' Theory gown, Oroton box clutch, Neil Lane jewelry, and strappy heels. "I live in New York so I thought it would be warm in L.A. but it's freezing!" she said.

With help from her 2-year-old daughter, Charlotte, Gellar wore a ruffled cobalt and white Monique Lhuillier gown and Jimmy Choo stilettos. "I put out all the choices and I let my daughter pick all of it," the actress said of her look. The final touch? Glittering Bulgari bangles and gem drop earrings.

Fey braved the downpour in a tiered, tea-length Zac Posen design and beribboned Christian Louboutin sandals. Although she received some criticism for her very retro dress, she expressed different (and facetious) concerns about her look. "It's raining a lot," she joked to reporters. "I'm worried that my tattoos are going to start showing. You know, body makeup."

The Babel nominee opted for an avant-garde lavender confection from Chanel. Her dress's trailing fabric flowers were compared to sea anemones.

A double fashion debut! A near-unknown Kruger got lots of attention in one of the first Marchesa designs. "I loved the dress they made but it was so wrong for that occasion," she told British magazine Stylist. "You could see my bellybutton and everybody else was in long, flowy gowns.

Kidman showed some skin in an YSL Rive Gauche by Tom Ford flapper dress with an illusion neckline and coin-sized golden paillettes.

We can always count on SJP to try something new! The Sex and the City nominee eschewed a more traditional gown in favor of a noir Jørgen Simonsen corset and matching trousers from Dior Homme by Hedi Slimane.

The actress danced onto the red carpet in a custom ballerina-inspired number by L.A. designer David Cardona. "I figured I'm either a prima ballerina or a prima donna—either one," joked the actress. "I love dressing up. And this is a party—there doesn't have to be so much seriousness! Look at the shoes!"

Who's that girl? Not only did the iconic blonde go dark for the 2000 millennial show, she also went casual with a tailored suit and diamante-decorated backless top by pal Stella McCartney for Chloé.

Diaz selected a kimono-inspired wrap and wide-leg trousers from It brand Chloé. Tousled hair and piles of funky jewelry complemented the idiosyncratic choice.

The up-and-comer flipped the script for her Steel Magnolias Globes win. After browsing the Giorgio Armani atelier with then-beau Kiefer Sutherland, she opted for an oversize men's suit. According to employees of the designer, Roberts was determined to have an outfit as comfortable as her boyfriend's. 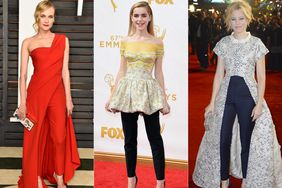